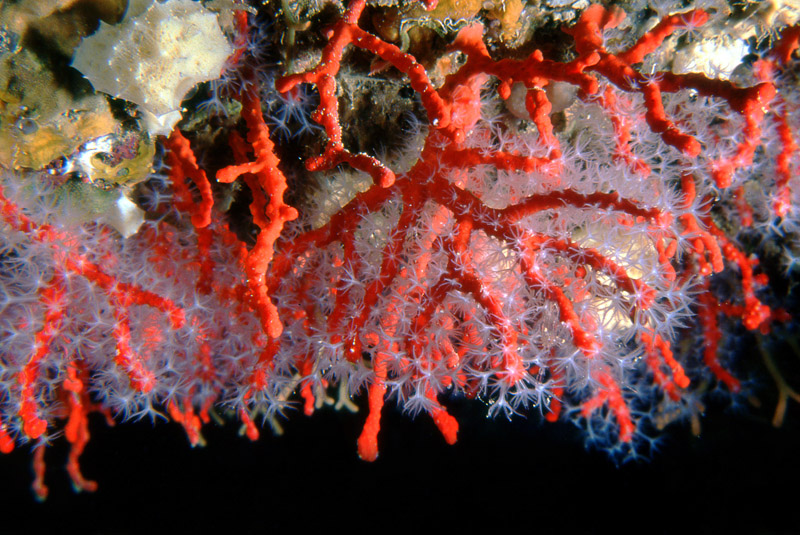 This week we are talking about red coral (Corallium rubrum), an endemic animal in the Mediterranean that is endangered for the captures, either legals or illegals, in the last years. I could write a lot about this topic because my Final Project of the Master was about this species, but today I’m focussing in the biology and distribution of this animal.

Red coral (Corallium rubrum) is an animal included in the phyllum Cnidaria (which includes jellyfishes and anemones), in the class Antozoa, which is characterized by the presence of a red skeleton of calcium carbonate. Its high value in the jewellery explain its conservation status. Red coral is a colonial animal, in which every individual is called polyp.

Red coral inhabits in rockery substrate between 5 and 300 meters depth, mainly in dark zones where the competence with fast growing species is little. It is in this places where red coral grows forming small and dispersed populations, while in deeper places it grows densely due to the lack of competence. It has an arborescent structure, achieving 50 cm length in the best cases.

Red coral is a species that reproduces more than once along its life (iteroparous species), with inner fertilization and incubates larvae. These larvae live just 30 days, what mean that they can’t travel very far and the persistence of the populations depends on the local recruitment. There are two separated sexes (dioic species), what mean that there are female and male individuals. The liberation of the eggs happens simultaneously during the summer, taking place sooner in shallower waters.

An important thing about its reproduction is that the size of the colony determines its reproductive potential: the larger individuals, despite are a small fraction of the population, are responsible of 50 to 98% of the production of gametes.

Red coral has an extremely slow growth, so its basal diameter grows 1 mm every 4 years approximately. In addition, its recruitment rate, that is how many individuals appear every year, is very low too, about 1.8 individuals for square meter every year.

Due to the intensive fishing of this spices to use it in jewellery, their populations are becoming smaller, with smaller  individuals, which has the lowest capacity in reproduction.

Red coral is an endemic species in the Mediterranean and East Atlantic, what means that this is only present in this region.

Nowadays, red coral is not protected by any law, but its extraction is regulated by law. Any extraction without a licence is considered illegal.