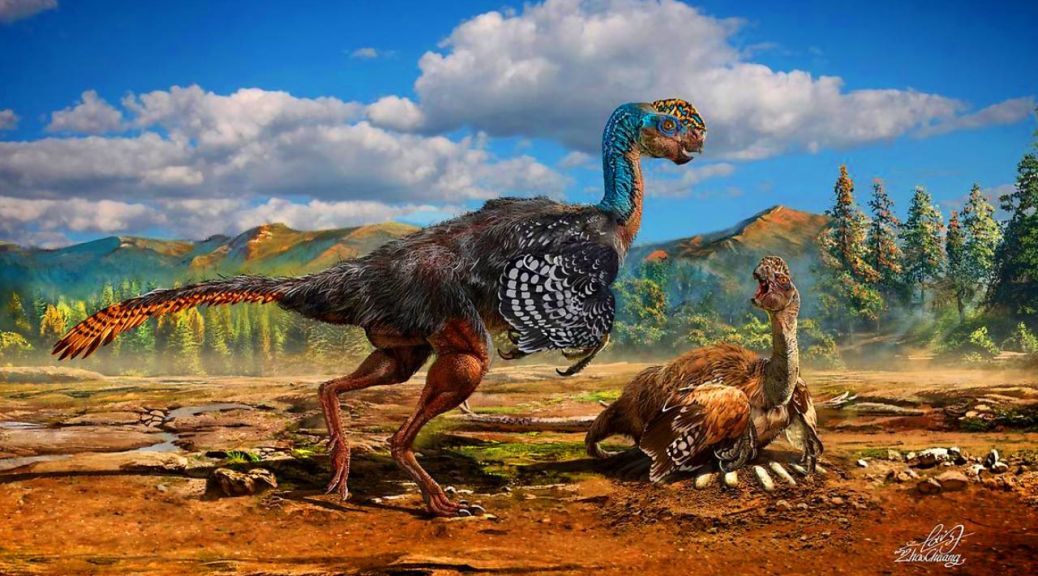 The presence of feathers is one the main characteristics of modern birds. Currently many dinosaur fossils show us that feathers appeared long before birds. Yet the feathers that those Mesozoic animals had weren’t exactly the same as the ones current birds have. The evolution of feathers was a long and gradual process, and in this entry we’ll review the most important evolutionary stages that brought those dinosaurs to develop anatomically modern feathers.

If you like this article and believe that our blog is useful, we ask for your vote in Bitácoras Awards 2015 as the best blog of Education and Science. Click the image below, enter with your Facebook or Twitter account, type the URL of the blog in the category “Educación y ciencia” and press enter. In just 30 seconds you will help us to spread more science! Please leave a comment if you have any question. 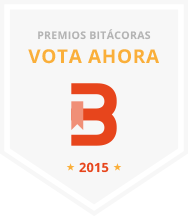 Feathers are fundamental structures for the life of modern birds. Feathers help them insulate from cold and hot weather, make them waterproof, camouflage, allow them to fly and in many species, feathers are very important in the mating rituals. In many birds, plumage allows us to differentiate between different species, telling a male and a female apart, and even allows us to know the age of an individual.

Feathers are the most complex integumentary structures found in vertebrates. These are formed in the epidermis, in little follicles which produce keratin. The β-keratin of the bird’s feathers, claws and beak is much more folded than the α-keratin found in mammalian’s hair, hooves or horns, making the first a much stronger structure. Feathers are resistant and light structures, but in many birds they correspond to a third of their body weight.

Modern feathers have a central shaft divided into two parts: the proximal part which inserts to the body called the calamus, and the rachis, the distal part from which the laminar part of the feather appears. This is called the vane and is disposed on both sides of the rachis. The laminar part is made of parallel ramifications called barbs, which have ramifications called barbules which also have ramifications in the shape of small hooks called barbicels that make barbules cross-attach to each other. The superior end of the vane (pennaceous part) barbules are perfectly arranged by the barbicels, while in the inferior end (plumulaceus part) barbules lack barbicels and so they float free from each other. 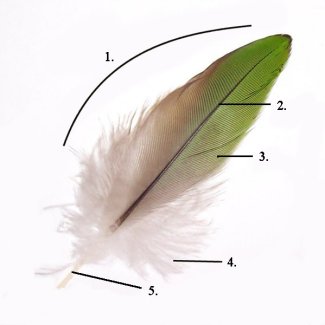 Parts of a feather:

According to its structure, in current birds we can find two main types of feathers:

Contour feathers: These are the feathers that make up the shape of the bird. These are long, flat feathers with a well-developed rachis and well-arranged barbs. These can be further classified into generic contour feathers, which cover the head, neck, trunk and limbs of the animal, and the flight feathers, called rectrices the ones in the tail (symmetric) and remiges the ones in the wings (asymmetric).

Down feathers: These are found forming a second layer under the contour feathers. These are feathers with a short rachis and with disordered barbs floating freely. Its main function is to thermally insulate the bird. Natal down feathers covering most bird hatchlings in some time of their lives are called “neossoptilus”.

Apart from these two types, there are other kinds of feathers in birds, such as the semiplumes (with an intermediate structure between contour and down feathers) and the bristles and filoplumes (with few barbs and mainly with a sensory function).

Origin and evolution of feathers

Probably dinosaurs develped the first feathers as a system to avoid the loss of body heat. Having a covering feathers, a layer of warm air becomes trapped around the animal, making its body temperature more stable. That’s why some scientists think that many dinosaur species had an almost endothermic metabolism (mesothermy), with high and constant body temperature. Nevertheless, primitive feathers or “protofeathers” were very different from modern feathers.

The first known protofeathers were nothing more than a cylindrical hollow spine-like filament, which formed on a follicle’s collar. Even though feathers and protofeathers are typically exclusive characteristics of theropods, this first protofeathers have also been found in two groups of non-theropod dinosaurs. These are the Heterodontosauridae and Psittacosauridae families, many species of which had spines homologous to stage 1 protofeathers which probably also served to retain body heat.

In theropods, feathers appeared in a group named Coelurosauria, which includes animals like the tyrannosaur, the velociraptor and modern birds. The oldest feathered coelurosaur known is Sciurumimus, which literally means “squirrel mimic”. This fossil got its name for its fully feathered tail, covered in filamentous protofeathers similar to a squirrel’s.

The next step on the evolution of feathers was the division of the cellular collar of the follicle, which brought the branching of the filament. The result is a plumulaceous protofeather with unbranched barbs originating in a calamus. Stage 2 protofeather are similar to down feathers of current birds and have been found in a wide variety of theropod fossils.

These protofeathers provided a better insulation, helping the animal to keep its body heat. It is also believed that it’s likely that the smallest dinosaurs were more fully covered in protofeathers, since smaller animals loose heat faster than bigger animals and so, they need more mechanisms to retain body heat. Bigger coelurosaur species like Tyrannosaurus may have lost their protofeathers much like modern elephants have lost almost all their body hair. Yet, it is possible that some species presented protofeathers after birth and during the first stages of life, and after growing up they would either loose them or only present them on some body parts.

Yet in a Chinese paleontological site, the two biggest feathered dinosaurs known were discovered. The first to be discovered was Beipiaosaurus, a strange looking coelurosaur of about 3 metres long with long claws, which presented protofeathers both filamentous (stage 1) and plumulaceous (stage 2). This species shared its habitat with Yutyrannus, a 9 metre-long animal up to 1400 kilos of weight, which had almost all its body covered in plumulaceous protofeathers. These two animals probably lived in a humid and cold environment, and their coat of protofeathers helped them to keep their warmth when temperatures would fall.

The third stage in the evolution of feathers gave rise to a protofeather with a central rachis made from the fusion of some barbs (3a) and a protofeather with barbules branching from the main barbs (3b). The combination of these two characters produced a pennaceous, vaned protofeather similar to the ones found in modern birds but less firm, as it lacked the hooked barbicels of modern feathers.

It is in this stage where we can start talking about present day feathers. The stage 3 structure with a rachis, barbs and barbules, developed small hooks on the barbules which made them cross-attach and keep the vane together. These feathers were like the ones found in modern birds, the contour feathers, which present a central shaft and a symmetric vane.

These feathers are found in many different dinosaurs, many of which had begun to develop adaptations for flight, or at least gliding. Despite this, we can also find them in typically running dinosaurs like Velociraptor, a terrestrial predator about the size of a turkey, with a long mouth and a sickle-shaped claw on its hind legs. This claw is thought to be used mainly to kill their prey, but some scientists think that they used their claw to climb trees and ambush their prey from above. Maybe their feathers served them to make more controlled leaps when they fell on their victims.

These feathers are also found in the oviraptorosaurs, a coelurosaurian group with beak and few or no teeth. Even if they couldn’t fly, they probably used their arm feathers to incubate their eggs (like the Avimimus genre) and the ones on the tail for display and communication with other members of their species (like the Caudipteryx, and Nomingia genera).

Other dinosaurs like Scansoriopteryx had an arboreal lifestyle, and the feathers on its arms allowed it to glide from one tree to the other both to hunt and to escape predators. A relative of this animal called Epidexipteryx, even though not having feathers on its arms (as far as is known) presented long vaned feathers on the tail, probably to send visual signals to other members of its species.

Finally the last stage in the evolution of feathers is the appearance of asymmetric feathers, with a displaced rachis making one half of the vane wider than the other. These feathers are the remiges found on the wings of birds, which not only increase drag during gliding, but also allow the animal to leave the ground and fly.

Even if it’s generally assumed that apart from birds no other dinosaur group accomplished powered flight, there’s one group which got really close. The microraptorians were a group of small feathered dinosaurs characterized by presenting flight feathers, not only on their front limbs but also on their hind limbs. The most famous of them, Microraptor, had asymmetrical flight feathers on its arms, legs and, unlike modern birds, on its tail.

Even if it’s usually considered a glider, some authors argue that possibly Microraptor was capacitated to fly. Some skeletal characteristics indicate that some microraptorians may have been better suited for flight than Archaeopteryx, the ancestor of modern birds. For example, Microraptor presented a fused more developed sternum than Archaeopteryx, which would have made for a major anchor point for the flight muscles.

Nevertheless, Archaeopteryx is still considered the nearest to the ancestor of modern birds that, even if it wasn’t a great flier, it already had the different kinds of feathers found on current birds. Probably many more dinosaurs were covered with feathers or protofeathers, but in this entry we have only seen the species which show irrefutable evidence of having them. As we have seen, the road to reach modern feathers was long and gave rise to a wide diversity of dinosaur species, but after a meteorite practically extinguished life on Earth 65 million years ago, only one group of feathered dinosaurs survived and thrived.

Did you enjoyed it? Remember to assess our work in Bitácoras Awards voting for us as the best blog of Education! Thanks a lot.

The next sources have been consulted during the elaboration of this entry: