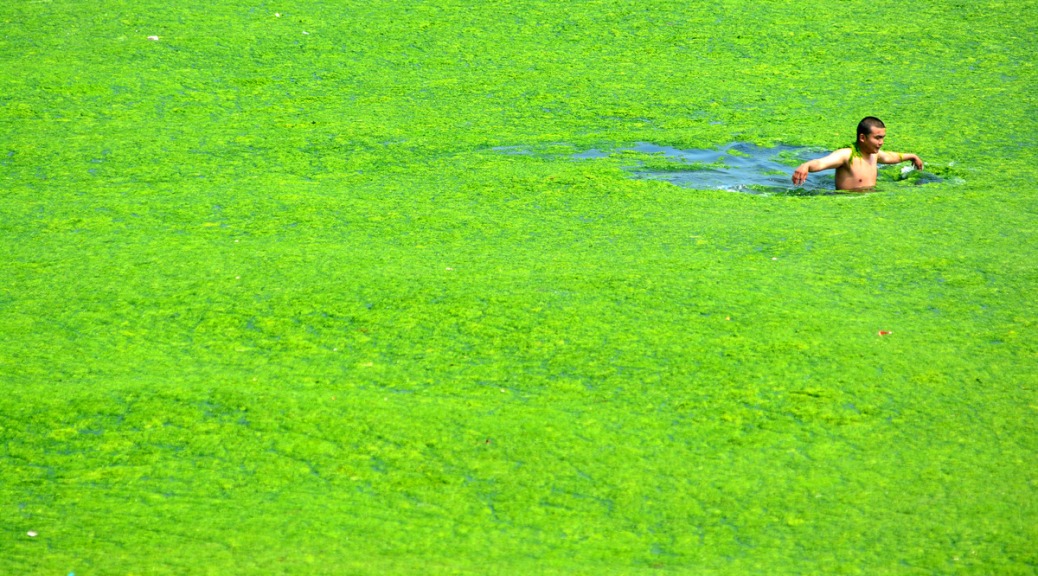 In August of 2016, the news of a green pool at the Olympic Games in Riode Janeiro was published in all media. Everyone was shocked and spokeon the topic, but this phenomenon occurs in nature more often than wethink, for example in  lake Urmia (Iran), lake Clicos (Lanzarote), Lake Hilier (Australia), etc. Would you like to know the reason for these changes?

THE CONCEPT OF EUTROPHICATION

We have heard speak so much about the surprising pool’s colour change of them Games Olympic, but do you know the scientific explanation to this effect?

This phenomenon of change of color  is very common in the nature. It is the eutrophication of  water. This concept makes reference to the proliferation of organisms due to an increase in the concentration of nutrients in water. So understand it easily: an increase of food occurs in water and  resulting in a rise in organisms which modify the characteristics of the water such as color, turbulence, etc.

In water bodies like lakes or swimming pools, this phenomenon is more commonly, but in sea also appear this blooms of organisms (above all phytoplacton).

The main nutrients that influence the eutrophication of lakes are the limiting factors nitrogen and phosphorus. In bodies of sweet water this last is determinant, while in salted water the nitrogen tends to be the limiting factor. A increase of these nutrient’s concentrations  begins the process of eutrophication and proliferation of photosintetic organisms (mostly microalgae and  photosynthetic bacteria as cyanobacteria or archaebacteria as the Holobacterias).

When a lake receive excessive nutrients, all the trophic structure  can change very quickly. Water is too fertilized and photosynthetic organisms proliferate causing an algae or microorganisms bloom.

Normally, we speak of  microalgae (phytoplankton) and cyanobacteria blooms, but in certain cases, when the change of nutrients is more drastic (that affects to the composition or chemical characteristics of  water) we can speak of the proliferation of bacteria and Archaea. For example in lake Urmia (Iran), proliferate exponentially the Halobacteria that support large saline concentrations. Due to the low rainfall and continuous extraction ofwater for agriculture, water becomes more salty and impede the life of the majority of organisms and favouring the blooms of the more specialized, as Halobacteria. The red pigmentation arises by the presence of a pigment known as bacteriorhodopsin.

The example of Rio’s pool shows the initial stages  of algae bloom. Some lakes, however, are in more advanced stages of eutrophication, as it would be the case of the Clicos Lake in Lanzarote. In this Lake proliferate exponentially the  Ruppia maritima algae.

Natural eutrophication process is highly regulated, since it tends to a balance between the inputs (precipitation, runoff, erosion…) and outputs of nutrients. There are three trophic states trophic in lakes: the oligotrophic, the mesotrophic and the eutrophic, depending on certain characteristics of water such as the concentration of nutrients and oxygen, its turbulence, the primary production etc. These states marke ‘age’ of lakes, i.e., a young lake will be oligrotrophic while one older will tend to eutrophication.In the following table we find some differences between these threetrophic states:

The ecosystems natural present resilience, i.e., capacity to return to the normal state after a sudden disturbance. Even so, with time, the ancient lakes tend to accumulate sediments and organic remains,making finally the Lake in a swamp. This process can last thousands of years.

The anthropogenic eutrophication makes reference to one type of eutrophication caused by humans. Waste water, waters rich in fertilizers and other types of pollution are the main causes of this type of eutrophication. The ecosystem is not capable of eliminating as many nutrients in a balanced way and they tend to accumulate. In this case, the process lasts much less that the natural: as only some decades are sufficient.

THE BEGINNING OF THE END

The eutrophication, however, mark the beginning of the death of ecosystem. But, how?

The increase in nutrient concentrations produces an increase in the proliferation of aquatic plants and algae carried out photosynthesis. Therefore an organism bloom occurs and causes the formation of a barrier in the water. In the surface, the concentration of oxygen is maintained while in deep areas, where the light not penetrates with ease, is produces an increase of aerobic breathing  and decreases the photosynthesis. This process of oxigen consumption  causes that every time has less concentration of this gas and the medium is again anoxic.With enough oxygen, species before peacefully living in the Lake, now will disappear.

On the other hand, a high biological activity  implies a decrease of the dissolution of certain nutrients in the water, causing a change in the pH and salinity of this, conditioning seriously also the habitability of these waters and favoring the proliferation of extremophiles. In addition, the presence of certain algae suppose  the production of toxins that affect negatively to the lake’s native populations  The main toxic cyanobacteria that tend to proliferate easily are Anabaena sp, Cylindrospermopsis sp., Microcystis sp. and Oscillatoria sp. This implies a great loss in the diversity of the area.

Finally, the organic remains of dead organisms accumulate at thebottom of thelake, thus increasing the sediment layer. By time, the volume of water has been reduced significantly,turning the place into a swamp.

As in the majority of cases, the actions of the man have serious consequences in the environment. We must avoid the pollution or will lose the great diversity that surrounds us.

One thought on “Why did change the water colour?”