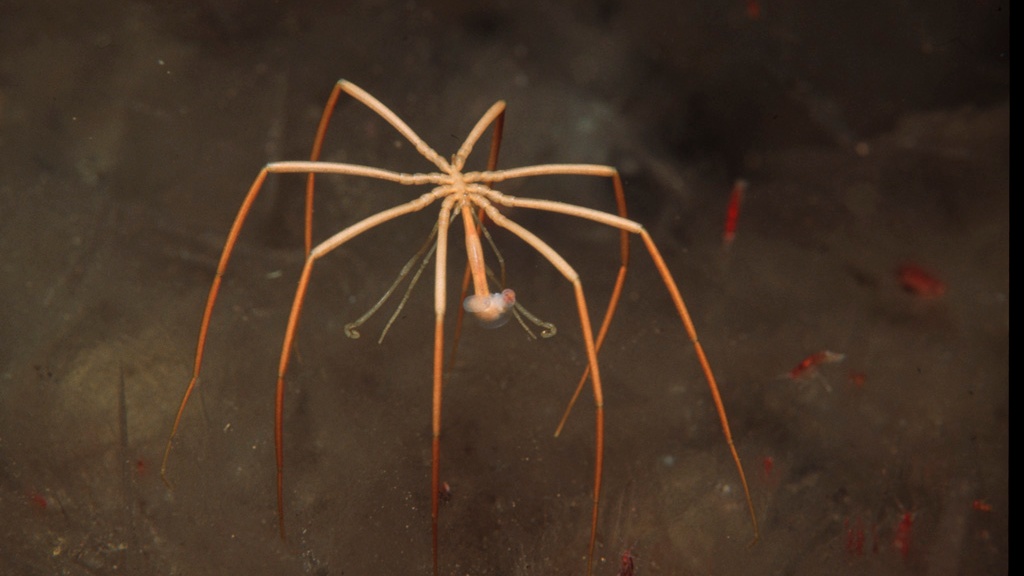 Biodiversity is surprising. Did you know that there exist sea spiders? Pycnogonida, also known as “sea spiders”, form one of the strangest groups of arthropods that have ever existed. They belong to the subphylum Chelicerata (along with spiders) and are a part of the invertebrate fauna from seas and oceans all over the world. Although their number is so scarce and they camouflage so well with the environment they are very difficult to see!

Do you want to know how to find and recognize them? Keep reading!

Pycnogonida (from the Greek pykno = ‘lots of’ or ‘thick’ and góny = “knees”), also known as Pantopoda (‘totally made of legs’), is a class of marine benthic arthropods (benthos = organisms that live in association with the sea floor). It belongs to the subphylum Chelicerata, group that also includes the ‘true’ chelicerates or Euchelicerata: arachnids (spiders, scorpions, ticks and mites),  xiphosurans (a relict group of organisms commonly known as horseshoe crabs) and the extinct eurypterids (sea scorpions).

There are about 8-9 families, 86 genera (some of them are fossils) and up to 1000 species of Pycnogonida described worldwide, and all of them are a part of an unique living order: Pantopoda.

Pycnogonida live in almost all marine habitats to almost any depth and latitude from the equatorial to Polar Regions both in coastal areas and in the abyssal plains about 6000m depth (although they appear more usually in the Mediterranean Sea, the Caribbean Sea, and Arctic and Antarctic oceans). Although its cryptic appearance and its capacity for camouflage with the environment make them difficult to see at the first sight.

Firstly, they were classified as arachnids because of its resemblance to spiders. Due to new anatomical and biological studies, they were reclassified as a new group inside chelicerata which was been related with arachnids. The possibility they were an ancestor of all chelicerates has also been considered, so they will form a very ancient group.

Pycnogonida is a morphologically varied group of organisms with a wide range of sizes: from species that barely reach a few centimeters (which are commonly located in coastal benthos) to those that reach 50-70cm lenght (which tend to appear in abyssal depths).

They have a spider-like body divided into two main parts: prosoma (head or cephalon + thorax) and opisthosoma (abdomen). On their head they feature a proboscis, that is, an organ that allows them to suck fluids from soft-bodied invertebrates; they also display 4 eyes on a tubercle and three pair of appendices: a pair of chelifores, a pair of palps and a pair of ovigerous legs (or ovigers), these last being exclusive to pycnogonids. Pycnogonids mainly use ovigerous legs for a self-cleaning function, but these structures seem to be more well developed on males in order to carry the eggs (and even the larvae when they hatch).

Pycngonida usually have 8 legs (even they sometimes suffer polymerization of their body segments and get one or two more pairs of legs, having 10-12 legs in total) which can be as thick as the rest of their body. This usually make them to look like if they were made only of legs (in fact, the term Pantopoda means ‘totally made of legs’).

Pycnogonida are very strange creatures on their inside: they lack respiratory system (since a very thin cuticle covers their body, the gas exchange takes place through its surface) and excretory system; they have a reduced circulatory system and the nervous system is composed only of a simple brain and two ventral nerve cords. Gonads are located in the prosoma and they extend in the leg cavities; in most species, genital openings are also located on the legs.

Where and how do they live?

As we said above, Pycnogonida form a group widely distributed in seas and oceans from all over the world. Whether they are located in the deeps or on the surface, they are always a part of the benthos.

After a courtship that is still unknown, both males and females release their gametes in to the environment, where the fertilization occurs. Once fertilized, the eggs are gathered by the male, which will take care of them. To pick them up, it binds them together and sticks them to its body by secreting a sticky substances.

After hatching, it emerges a free-living larva known as protonymph, which will reach the adulthood by suffering a metamorphosis process (are you interested on metamorphosis? Click here to learn more about it!).

They became carnivorous once they grow; they use chelifora to capture and chop soft-bodied organisms and then use their proboscis to suck their fluids (as spiders do). Generally, they feed on benthic or sessile organisms, like anemones, sponges and bryozoans.

NOTE: Pycnogonida are difficult to see at the first sight, but if you are curious people and you like diving, I encourage you to look into dense algae and sea phanerogams extensions. You will see one if you are lucky!

But it will be more easy to identify them if we have seen them in motion before (video from the Youtube channel Cloud. Tube):

Curiosities of the group

Pycnogonida form a very curious group, both for the morphological external traits that characterize its species and for its biological traits:

Nowadays, Pycnogonida is a fairly unkown group of organisms on many levels: they are phylogenetically old, scanty and often located so deep in the sea they turn out to be difficult to study. Moreover, no benefits for humans are been found from this group beyond its importance in terms of biodiversity. Unfortunately, this fact usually condemn strange organisms to oblivion.

And you, what do you think about this? Do you think is essential for us, humans, and for all life forms on Earth to preserve biodiversity?