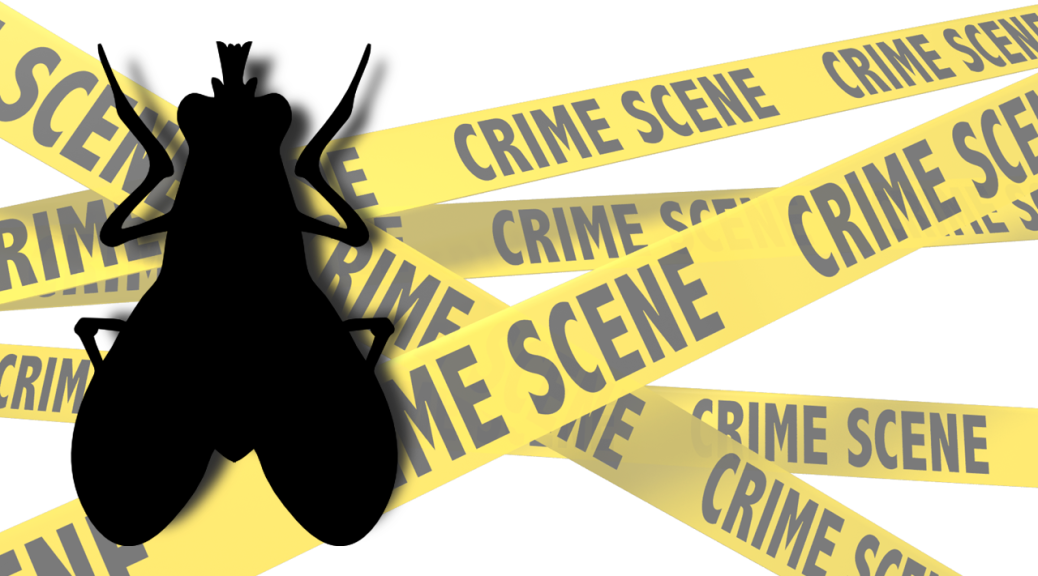 Unavoidably, every organism’s life comes to an end sooner or later. But where the cycle of life ends for some, others will find their opportunity to start a new life. Insects and other arthropods are some of the organisms that take advantage of dead animal rests to develop, and their study offers us valuable information to set the time, place and circumstances of someone’s death (something of special interest for criminologists). How is this information obtained from the study of arthropods? Keep reading to find out the answer.

Forensic entomology is a branch of applied entomology that uses insects and other arthropods as scientific evidences to aid legal investigations; however, its most well-known use is the medicolegal one. Medicolegal forensic entomology is focused on the study of insects and other arthropods that inhabit decomposing remains or corpses to determine the time passed after their death, as well as to clear up the circumstances and determine the location where it took place. It’s a useful tool for criminologists since it can help to verify the alibi of a suspected assassin or to help in the identification of a victim.

Forensic entomology is not a modern discipline. The concept of forensic entomology and the first case resolved by applying this discipline dates to at least the 13th century in China: the identity of the assassin of a farmer was discovered when all the suspected were gathered and forced to leave their sickles on the ground; then, flies were attracted only to one sickle, because it still had remains of blood and tissues on its edge.

Back then, the use of forensic entomology was anecdotal and their bases were not well-known. It was not until the 17th century that Francesco Redi refuted the “spontaneous generation” theory, which defended the idea that life comes from non-life (organic and inorganic matter) and that no causal agent is needed. Through different experiments, Redi proved something that seems us logical nowadays: life comes through life, so that insects that develop on corpses were already there before we noticed them (either as eggs or larvae).

Unconsciously, Redi’s experiments revealed some more facts: for example, that both location and climatology agents which a corpse is exposed to determine the composition and abundce of insect’s populations. This is very interesting since it helps us to find out the exact location where a death took place and if the corpse was moved to another place.

Historically, it was not until the 19th century that Bergeret, a French doctor, along with the discoveries of Orfila (who listed and described more than 30 insects and other arthropods which colonize dead bodies) and Redi, expanded and systemized forensic entomology. However, it’s considered that the true birth of this discipline took place at 1894, when J. P. Mégnin published his most famous paper: ‘La faune des cadavres: Application l’entomologie a la medicine legale’.

Uses and application of forensic entomology

When criminologists face a crime, they ask themselves three basic questions: ‘How’, ‘When’ and ‘Where’. Forensic entomology can respond correctly to those of the moment and place of death.

From a legal point of view, it’s essential to estimate the time elapsed since the victim’s death. This time lapse is known as Post-Mortem Interval (PMI). In human corpses, this interval can be estimated through three methods: histological (temperature, stiffness, cadaveric lividity…), chemical (measurement of the level of different chemicals) and zoological (animal action and insects’ invasion). Also, we must consider the deterioration level of plastic tissues, clothes, etc. However, after 72h the most efficient method to estimate de PMI is forensic entomology.

The place of the death strongly determines the species of arthropods we can find in a dead body as well as the succession patterns of their communities. Among the most determinant parameters of arthropods’ communities’ composition we highlight the biogeographical region (species from tropical and temperate regions are almost never the same), the season (at median latitudes, seasonality has an important role on biological cycles) and the specific traits of the habitat (moisture, solar radiation, accessibility and exposition degree, etc.), which can make more or less easier the colonisation of arthropods and, consequently, to alter the PMI estimation.

Along this article, you will notice we only refer to terrestrial arthropods: this is due to the difficulty and complexity to determine the PMI and the place of death at marine habitats.

The main actors: the arthropods

Arthropods we can find in a corpse are classified in four main groups:

The corpse colonisation step by step

Despite the specific variations depending on each case, colonisation and succession of populations of arthropods in a corpse follow a quite constant pattern.

Some dipterans (Calliphoridae and/or Sarcophagidae) feel attracted to gases expelled by the body during the first stages of decay (ammoniac, sulfhydric acid, nitrogen, carbon dioxide). Then, they lay their eggs inside natural holes (eyes, nose and mouth), in wounds or on the surface in contact with the substract, which has a high moisture level due to the accumulation of bodily fluids. However, their sense of smell is so developed that they sometimes land on the body when the person is still alive, especially when it has open wounds!

We rarely see these two families coexisting at the same time in a corpse, probably due to the fact Sacrophagidae larvae prey on the ones of Calliphoridae.

Is essential to know the development degree of larvae and pupae of each species, as well as their length of their life cycles and their specific traits to estimate the PMI. These parameters may vary among the species, also due to the external conditions and/or the death circumstances; moreover, their presence is so common that their absence can result informative as well.

When fermentation of fats begins, there appear the first coleopterans (Dermestidae) and lepidopterans (e.g. the moth Aglossa pinguinalis), being very common in one month old corpses. While Dermestidae life cycle lasts 4-6 weeks (larvae feed on fats and moults of preview arthropods), the one of lepidopterans such as A. pinguinalis can last until the next spring if external temperatures are not adequate for their development.

During this stage of the body decay, there appear dipterans which are also very common during other fermentation processes, such as the one of cheese or ham (Piophila sp., Fannia sp., as well as Drosophilae, Sepsidae and Sphaeroceridae genres). There also appear coleopterans of the genus Necrobia.

During this stage, there appear the last dipterans (genus Ophira and family Phoridae, essentialy), which can be found inside bird nests or lairs feeding on animal remains, excrements and organic wastes from their hosts. There also appear different groups of necrophagous coleopterans of the genera Nicrophorus, Necrodes and Silpha, very common during advanced decay stages, and predator coleopterans of the families Staphylinidae (genera Coprohilus, Omalium and Creophilus) and Histeridae (genera Hister and Saprinus).

After more than 6 months, the corpse is almost totally dry. In this moment, there appear a huge number of mites of different species that feed on mildew and fungi covering the rests. Posteriorly, there also appear coleopterans that feed on hair rests and nails (Dermestes, Attagenus, Rhizophagus, etc.), some Dermestidae species present on previous stages and some lepidoterans.

After more than a year, the scarce rests are sometimes attacked by coleopterans of the genera Ptinus, Torx and Tenebrio.

Forensic entomology is just one example of how useful can be to study insects and other arthropods both from a taxonomical and an ecological point of view. However, there exist many more applications. Do you know them or want to learn about them? You can leave your suggestions and curious facts on the comments’ section below.

Main photo made by the author of this post using different images (fly vector dessigned by Freepik on www.flaticon.com with a licence CC 3.0 BY).