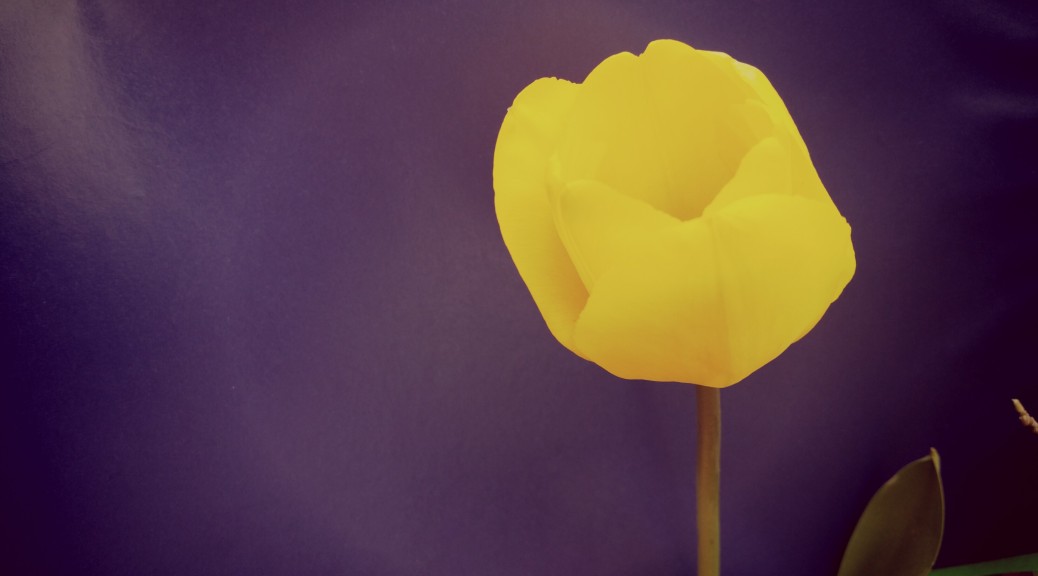 The spring beginning has allowed some of you to enjoy the beautiful colours of those flowers that have already bloomed. This time I’m going to talk about one of the most colourful, simple, but wonderful flowers you probably already will have had the opportunity to observe in many gardens or in nature. It is the tulip. Besides introduce you this plant, in this article I will make a more detailed description of its morphological parts. I think it’s a good example to start learning vocabulary, because its structure is quite clear and simple. Therefore, if you are interested in learning some technical vocabulary, now it’s a perfect chance. But, do not think I’m just going to talk about the technical aspects, because reading this article you will also be able to learn the history behind the tulips. And as you will see, these flowers caused a good fever!

The tulips (Tulipa sp.) are flowers that when are closed seem a turban. This plants have been very popular and well-known for very long time, because of its high ornamental interest.

Its genus is distributed in the central and western Asia, in the Mediterranean and in Europe. It is known that its origin belongs to the centre of Asia and, from there, their distribution has been expanded naturally and by human actions. And, although about 150 species are known in the nature, human intervention has greatly increased the species list. Caused both by hybridization (forcing the offspring of two interesting species) and by selective breeding (choosing the offspring which has more value).

As already mentioned above, tulips are one of the most ornamental plants used, both in decoration as in landscaping. And while the tulip crop is rather old, the boom occurred in Europe during the seventeenth century. Giving rise to what is known as Tulip mania or the Tulip fever. In those moments, especially in Netherlands and France, a high interest in the cultivation of these plants awoke. The fever was so great that people were selling goods of all kinds to buy tulip bulbs, even reaching up to sell the most valued as the house or farm animals.

The cause of this was originated in the Netherlands, where the single-coloured tulip bulbs were being sold at that time. But afterwards, the Eastern bulbs that give rise to flowers with variegated colours appeared. And they were very attractive. Although the cause was uncertain in that moment, it was known that if a single-coloured bulb touched other marbled-coloured bulb, the first one would turned into a marbled-coloured bulb. This caused the tulip’s price began to increase and soon after occurred the first speculative bubble in history.

Nowadays, we know that the cause is due to a virus which is transmitted from some bulbs to others; this virus is known as Tulip breaking virus.

Tulips are geophytes, that is, they have resistance bodies underground to survive during unfavourable seasons, the winter. These organs are bulbs, which have been used on crops to preserve these plants.

Its leaves are linear or linear-lanceolate, i.e., they are long, narrow and acute. Parallel venation can be observed on its leaves, so a nerve is by side other and with the same direction. Their arrangement is usually in rosette: this means that the leaves are born agglomerated in the bottom of the plant above the bulb, and at the same level. Even so, you can sometimes see some leaves along the stem, cauline ones. These are sessile, without petiole, and wrap a little the stem.

To cultivate tulips, we can use their bulbs or fruits. These seconds are capsules, a dried fruits, opened due the action of some valves. At first, the seeds are hooked inside these capsules and then are released and distributed on the environment.

Tulips appear in early spring, due they are plants adapted to very dry Mediterranean climate or cold areas.

As you have seen, the flowers are solitary or appear to 3 gathered in one stem. They are usually large and showy, hermaphrodite, therefore, they have both male and female reproductive organs, and are actinomorphous, that is, they can be divided symmetrically for more than two planes of symmetry.

These flowers have 3 inner tepals and 3 external that are free among them, without being bound or fused. We talk about tepals when the sepals (calyx pieces) and petals (corolla parts) are similar between them. In this case, the tepals are petaloid, because they adopt typical colours and shapes of the petals.

In the inner part of the flower, we can see 6 stamens divided equally into 2 whorls; being these two closely spaced between them, so they seem to arise from the same point. And right in the centre, surrounded by these stamens, there is the gynoecium, female part of the flower. This gynoecium consists of the ovary and 3 stigmas attached to this directly. The stigmas are this part of female reproductive organs where it should arrive pollen to fertilize the ovaries.

As you have seen in this article, some flowers have caused curious stories and a great impact on our society. Also, you have had the opportunity to observe in detail the tulip’s structure. One more time, I wish you liked it.