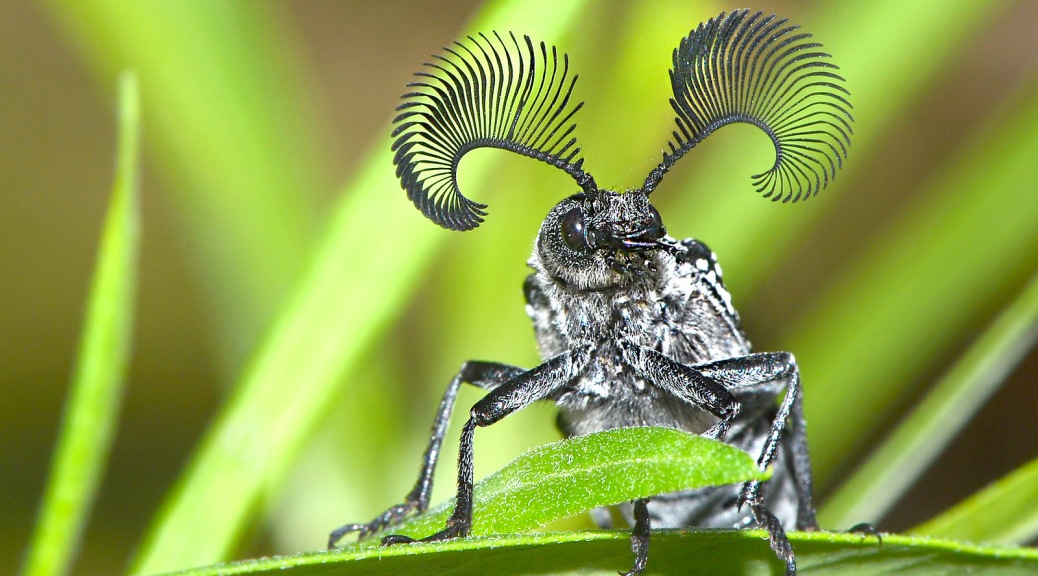 Insects perceive their surroundings through different organs, among which antennae are some of the most important. Antennae appear in a lot of incredibly diverse shapes and sizes, and every group of insects develops one or more models. We encourage you to know more about their origin, functions and diversity through this post.

The origin of antennae

Antennae are paired sensorial appendages located in the anterior parts of insects’ body. Except for chelicerates (spiders, scorpions…) and proturans (non-insect hexapods), all arthropods, either crustaceans, hexapods (diplurans, springtails -Collembola- and insects), myriapods (centipedes and millipedes) and the extinct trilobites, have antennae when being adults.

However, the rest of arthropods only have a single pair of uniramous antennae. Hexapods (like insects), which seem to be closely related to crustaceans according to the pancrustacean model, seem to have just preserved the secondary pair of antennae typical of crustaceans.

According to some authors, antennae appear to be true appendages; that is, they would start to develop during the embryological development from a head segment the same way legs do. However, this segment would have evolved into a reduced and inconspicuous piece, now being unappreciable. Moreover, antennae can also regenerate like legs.

How do insects feel through antennae?

So, what does this title exactly mean?

Antennae are microscopically covered with tiny hairs known as sensilla, which are not related with hairs found in vertebrates since they are made of chitin (as the rest of insect’s cuticle) instead of keratin. 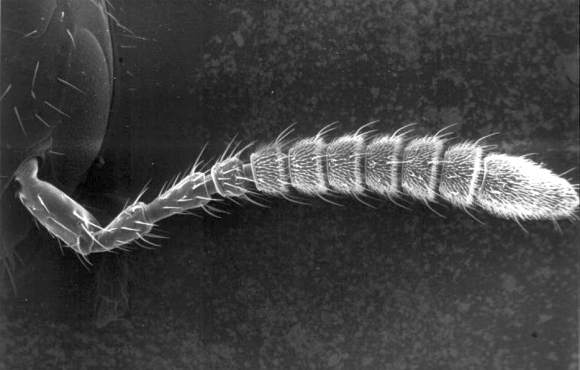 Despite being almost identical at the first sight, there are different types of sensilla: chemoreceptorial sensilla have an inner channel through which suspended molecules enter (e.g. pheromones), while mechanoreceptorial sensilla are retractable and move at the slightest pressure or when the insect changes its position with respect to the ground (in this case, these are called proprioceptor sensilla).

So, insects taste, smell, touch and communicate in part through antennae, thus allowing them to gather information about food sources, potential mates (pheromones), enemies, dangerous substances (e. g. a poisonous plant), nesting places and migratory routes (as in the case of the monarch butterfly). Other organs, such as legs, palpi and even the ovipositor (organ for laying eggs) sometimes have sensorial cells.

Inside and in the base of sensilla there are sensorial neurons connected to the insect’s brain; specifically, a brain region known as deutocerebrum. In chemoreceptorial sensilla, molecules bind with specific receptors that send nervous signals to the antennal lobe through the sensorial neurons. This lobe is somewhat like the olfactory bulb found in vertebrates.

Types of antennae in hexapods

Except for the proturans, which are wingless hexapods, diplurans, springtails (collembola) and insects develop different types of antennae. These are divided in two main groups:

The three basic segments of insects’ antennae are the following:

1) Scape: basal segment that articulates with the insect’s head and the only one that has an own set of muscles. The scape is mounted in a socket called torulus.

2) Pedicel: the second antennal segment or the one that comes just after the scape. This segment has a relevant role since it contains the Johnston’s organ, which is a collection of sensory cells. This organ is absent in non-insect hexapods (springtails, diplurans).

3) Flagellum: the rest of antennal segments that form the antennae, which are individually known as flagellomeres. These flagellomeres are connected by thin membranes that allow them to move as a whole despite not having muscles.

From this basic pattern (scape + pedicel + flagellum), each group has developed numerous antennal models based on their lifestyle:

These are very reduced antennae with a pouch-like shape and a small bristle that emerges from its third modified segment.

Capitate antennae have a club or knob at their ends.

Example: usually found in butterflies (Lepidoptera) and in some beetles (Coleoptera).

Unlike the capitate ones, clavate antennae get progressively thicker in their ends.

This is the simplest model of antennae: long, thin and made of equally sized and shaped segments.

These are quite similar to pectinate and lamellate antennae (see below), but with thinner and flattener segments that make them to look like a folding paper fan; also, these thin projections occupy all the antenna, and not only the terminal segments as in lamellate antennae. This model is found in males of some insects, thus having a large surface for detecting pheromones.

These are bent, almost like a knee joint. The first antennal segment (scape) is usually located before the joint. The rest of segments together are known as funicle.

The terminal segments enlarge to one side in form of flat and nested projections, thus looking like a folding fan.

Segments have a lateral projection, so they look like combs.

Plumose antennae look like feathers as their segments have numerous thin branches. Having a bigger antennal surface allows them to detect more suspended molecules, like pheromones.

Each segment is angled or notched on one side, thus making these antennae to look like saws.

These antennae are bristle-shaped, being thinner and longer in their ends. They are quite similar to filiform antennae, but thinner.

Similar to filiform antennae, but the terminal segments are pointed and slender, looking like a style. The style can either have bristles or not.

You can read more about the different antennal models here and here, or take a look to the antennal gallery by John Flannery.

If you know more antennal models or curious facts about insects’ antennae, feel free to share it with us by leaving a comment below!