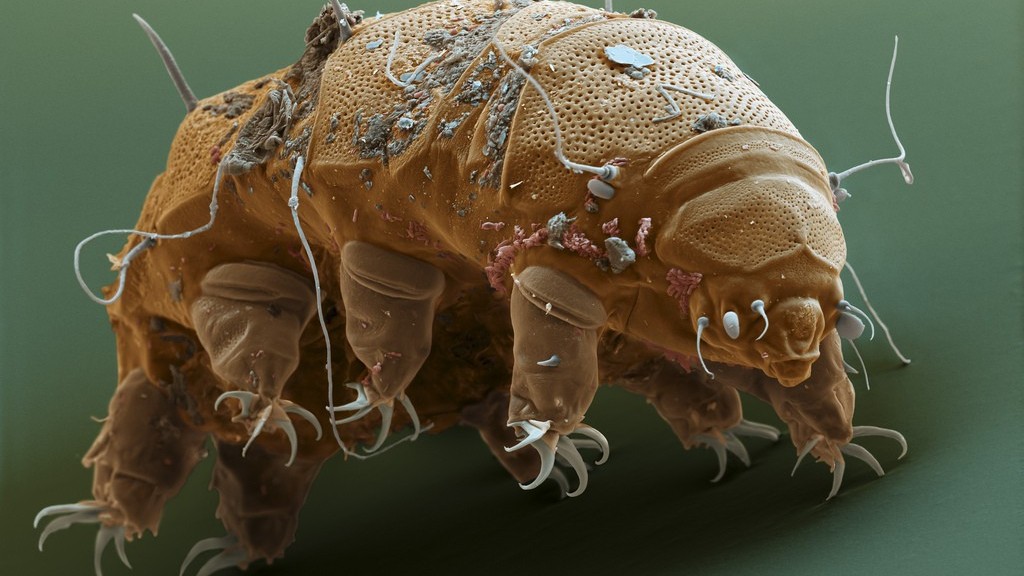 The smallest bears in the world have almost superhero abilities. Actually, they are not bears: water bears is the popular name of tardigrades. They are virtually indestructible invertebrates: they can survive decades without water or food, to extreme temperatures and they have even survived into outer space. Meet the animal that seems to come from another planet and learn to observe them in your home if you have a microscope.

WHAT IS A TARDIGRADE?

Tardigrades or water bears, are a group of invertebrates 0.05-1.5 mm long that preferably live in damp places. They are especially abundant in the film of moisture covering mosses and ferns, although there are oceanic and freshwater species, so we can consider they live anywhere in the world. Even a few meters away from you, in the gap between tile and tile. In one gram of moss they have find up to 22,000 individuals. They are found in Antarctica under layers of 5 meters of ice, in warm deserts, hot springs, in mountains 6,000 meters high and abyssal ocean depths: they are  extremophiles. It is estimated that over 1,000 species exist.

Its popular name refers to their appearance, and the scientific name to their slow movements. Their bodies are divided into five segments: cephalic, with its tube-shaped mouth (proboscis) with two internal stilettos and sometimes simple eyes (ommatidia) and sensory hairs, and the remaining 4 segment with a pair of legs per segment. Each leg has claws for anchoring to the ground.

Look at this video of Craig Smith to see tardigrade’s movements in more detail:

With its mouth stilettos, tardigrades perforate plants and absorbe the products of photosynthesis, but they can also feed absorbing the cellular content of other microscopic organisms such as bacteria, algae, rotifers, nematodes… Some are predators too and can eat whole microorganisms.

Their digestive system is basically the mouth and a pharynx with powerful muscles to make sucking motions that opens directly into the intestine and anus. Some species defecate only when they shed.

They have no circulatory or respiratory system: gas exchange is made directly by the body surface. They are covered by a rigid cuticle which can be of different colors and is shed as they grow. With each moult, they lose oral stilettos, to be segregated again. They are eutelic animals: to grow they only increase the size of their cells, not their number, that remains constant throughout life

Tardigrades generally have separate sexes (are dioecious) and reproduce by eggs (are oviparous), but there are also hermaphrodites and parthenogenetic species (females reproduce without being fertilized by any male). Fertilization is external and development is direct: they don’t have larval stages.

The tardigrades are incredibly resilient animals that have survived the following conditions:

HOW DO THEY DO THAT?

The tardigrades are able to withstand such extreme conditions because they enter cryptobiosis status when conditions are unfavorable. It is an extreme state of anabiosis (decreased metabolism). According to the conditions they endure, the cryptobiosis is classified as:

Referring to exposures to radiation, which would destroy the DNA, it has been observed that tardigrades are able to repair the damaged genetic material.

These techniques have already been imitated in fields such as medicine, preserving rat hearts to “revive” them later, and open other fields of living tissue preservation and transplantation. They also open new fields in space exploration for extraterrestrial life (Astrobiology) and even in the human exploration of space to withstand long interplanetary travel, ideas for now, closer to science fiction than reality.

The sparse fossil record, the unclear evolutionary relatedness and great resistance, led to hypothesis speculating with the possibility that tardigrades have come from outer space. It is not a crazy idea, but highly unlikely. Panspermia is the hypothesis that life, or rather, complex organic molecules, did not originate on Earth, but travelled within meteorites in the early Solar System. Indeed, amino acids (essential molecules for life) have been found in meteorites composition, so panspermia is a hypothesis that can not be ruled out yet.

But it is not the case of tardigrades: their DNA is the same as the rest of terrestrial life forms and recent phylogenetic studies relate them to onychophorans (worm-like animals), aschelminthes and arthropods. What is fascinating is that is the animal with more foreign DNA: up to 16% of its genome belongs to fungi, bacteria or archaea, obtained by a process called horizontal gene transfer. The presence of foreign genes in other animal species is usually not more than 1%. Could be this fact what has enabled them to develop this great resistance?

DO YOU WANT TO SEARCH TARDIGRADES BY YOURSELF AND OBSERVE THEM IN ACTION?

Being so common and potentially livIng almost anywhere, if you have a simple microscope,  you can search and view living tardigrades by yourself: