Some beetles, lizards... have horn-like structures, but mammals have the most diverse horns without doubt. Are all horns the same? What are they used for? Do they have economic value? Find out more in the following post.

Bulls, deer, rhinos… all of them have structures on their heads that we call horns, but they are not all the same. Strictly horns are two bony structures that emerge from the frontal bones of the skull, they are permanent (never fall off) and unbranched. In some species they grow throughout life.

They are made up of a bony nucleus and an outer coating of keratin (the same protein from our hair and nails).

Horns have different shapes and sizes depending on the species: straight, curved or spiral; flipped, bent or flat; short or wide. All of them have sharp ends.

All bovids (bulls, goats, sheep, antelopes…) have horns, including the females in many species. However, in general, females have thinner horns while in males they are wider and can withstand more force.

When the horns begin to grow, they do not do it directly from the bone, but from the connective tissue. When growth is complete the horn nucleus ossifies and fuses with the frontal bones of the skull.

The pronghorn has different horns than the bovids: they are branched and the keratinized covers change annually, whereas in bovids are permanent.

Antlers are two bony structures that come out of the frontal bones, but they are seasonal (they change every year) and branched .

Antlers only exist in males of the Cervidae family, except for the caribou or reindeer (Rangifer tarandus), in which both males and most of females have antlers.

GROWTH OF THE ANTLERS

Unlike horns, antlers do grow out of bony structures (pedicle) found on the side of the frontal bones.

Growth begins in spring (April or May in the Northern Hemisphere), due to hormonal changes and the gradual increase in light hours. The growth of the antlers has several phases:

After the reproductive period the hormonal levels fall and the photoperiod decrease, which causes the pedicle to lose calcium, it weakens the union between itself and the horn and the horn ends up falling. The cycle will be repeated the following spring, and will appear one more branch, so the most an antler is branched, the older is the individual.

USES OF HORNS AND ANTLERS

As we know, mainly antlers and horns are used by males during the breeding season to compete for females, in fights and exhibitions. Usually the animals collide their horns/antlers together to demonstrate their body strength. Horns, often sharp, are also used as a defense against predator attacks.

Check out this spectacular dispute between two Canadian mouflons:

For humans, horns and antlers shouldn’t have significance. Unfortunately, its carriers are objective of hunters, for the mere achievement of their “trophy.” In Spain there are more than one million people with a hunting license. According to Fecaza, the hunting business generates 3.6 billion euros a year in Spain.

Spain is also the second importing country of hunting trophies. Thousands of euros are paid (from 2,000 to 80,000) to make hunting safaris in Africa, for example, where the most valuable animal is the one with the largest horns. This results in the elimination of the best breeding males and in the decrease of specimens in general.

AND THE RHINOCEROS HORN?

Ironically, since their horns have led and are leading to extinction many species, rhinos do not actually have real horns, as they do not have a bony nucleus or a cover. They are an accumulation of corneous fibers, resembling a thick hair, although they are not true hairs. In addition, the horn is placed above the nasal bones, not  in frontal position as in the case of antlers and true horns. Only in species with two horns, the second one rests on the frontal bones.

In females, the horn would help to protect the young, whereas in males to face their rivals.

As we have discussed, due to the alleged magical powers of rhinoceros horns in the traditional medicine, we are extinguishing rhinoceroses just like with are doing with the pangolin… for a handful of keratin. On the black market, a kilo of rhinoceros horn can cost from $ 60,000 to $ 100,000, more than gold.

HAVE YOU NOTICED GIRAFFE’S HORNS?

As you may assume at this point, no, giraffes do not have true horns, but they also have two structures in the head, males, females and newborns. They are called ossicones. They are permanent, not branched and they are always covered with hair and skin. In fact, they already appear in the fetus as cartilaginous structures and do not merge into the skull until the age of 4, between the frontal and parietal bones.

We can tell age and sex of a giraffe by its ossicones: if they are thin and ended up in a tuft of hair they are young ones or females, while males do not usually have hair on its top. Males also have a protrusion in front of the ossicones more sharp than females. At an older age, this protuberance is bigger, since calcium is deposited over time.

Giraffe ossicones are used by males during their confrontations. Surely they played a more important role in its ancestors like the Sivatherium, the largest giraffid that has ever existed. It is possible that they also have some function in thermoregulation. 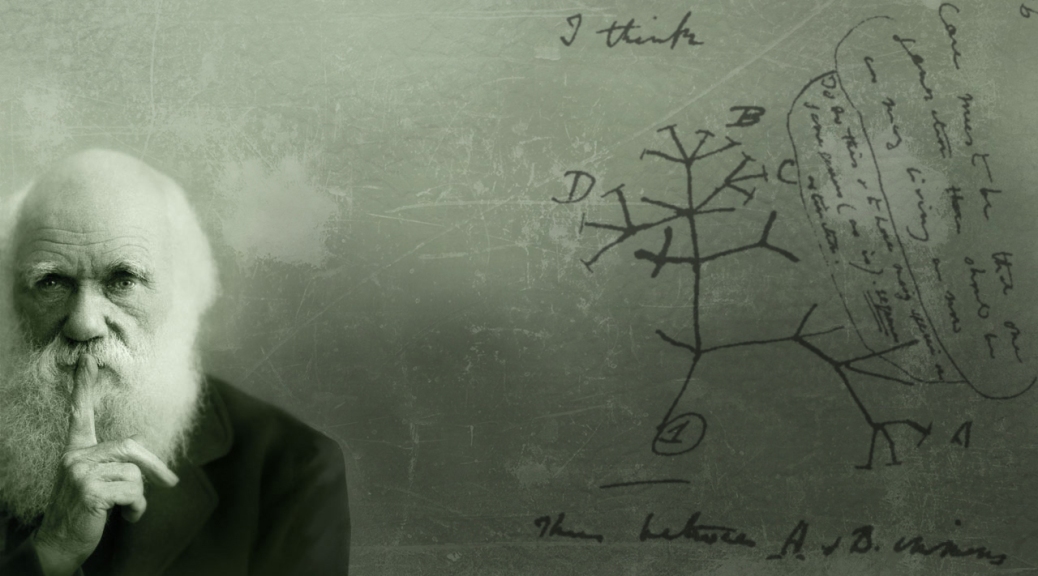 Biological evolution is still not well understood by general public, and when we speak of it in our language abound expressions that confuse even more how mechanisms that lead to species diversity work. Through questions you may have ever asked yourself, in this article we will have a first look at the basic principles of evolution and debunk misconceptions about it.

IS EVOLUTION REAL? IT IS NOT JUST A THEORY OR AN IDEA WITHOUT EVIDENCES?

Outside the scientific field, the word “theory” is used to refer to events that have not been tested or assumptions. But a scientific theory is the explanation of a phenomenon supported by evidence resulting from the application of the scientific method.

Theories can be modified, improved or revised if new data don’t continue to support the theory, but they are always based on some data, repeatable and verifiable experiments by any researcher to be considered valid.

So few people (sic) doubts about the heliocentric theory (the Earth rotates around the Sun), or the gravitational theory of Newton, but in the popular imagination some people believe that the theory of evolution made by Charles Darwin (and Alfred Russell Wallace) is simply a hypothesis and has no evidence to support it. With new scientific advances, his theory has been improved and detailed, but more than 150 years later, nobody has been able to prove it wrong, just the contrary.

WHAT EVIDENCE WE HAVE THAT EVOLUTION IS TRUE?

We have many evidences and in this post we will not delve into them. Some of the evidence available to us are:

IS IT TRUE THAT ORGANISMS ADAPT TO THE ENVIRONMENT AND ARE DESIGNED FOR LIVING IN THEIR HABITAT?

Both expressions, frequently used, mean that living beings have an active role to adapt to the environment or “someone” has designed them to live exactly where they are. It is a typical example of Lamarck and giraffes: as a result of stretching the neck to reach the higher leaves of the trees,  currently giraffes have this neck for giving it this use. They have a necessity, they change their bodies to success. It is precisely upside down: it is the habitat that selects the fittest, nature “selects” those that are most effective to survive, and therefore reproduce. It is what is known as natural selection, one of the main mechanisms of evolution. It needs three requirements to act:

Over the years these changes are accumulated until the genetic differences are so big that some populations may not mate with others: a new species has appeared.

If you thought that this is similar to artificial selection that we do with the different breeds of dogs, cows who give more milk, trees bearing more fruit and larger, congratulations, you think like Darwin as it was inspired by some of these facts. Therefore, living beings are mere spectators of the evolutionary process, depending of changes in their habitat and their genetic material.

WHY ORGANISMS ARE SO DIVERSE?

Evolution can be observed in beings with a very high reproduction rate, for example bacteria, since mutations accumulate more quickly. Have you ever heard that bacteria become resistant to our antibiotics or some insects to pesticides? They evolve so quickly that within a few years were selected the fittest to survive our antibiotics.

ARE WE THE MOST EVOLVED ANIMALS?

Theory of Evolution has various consequences, such as the existence of a common ancestor and that therefore, that we are animals. Even today, and even among the young ones, there is the idea that we are something different between living beings and we are in a special podium in the collective imagination. This anthropocentric thinking caused Darwin mockery and confrontations over 150 years ago.

We use our language to be “more evolved” as a synonym for more complex, and we consider ourselves one species that has reached a high level of understanding of their environment, so many people believe that evolution has come to an end with us.

The question has a mistake of formulation: actually evolving pursues no end, it just happens, and the fact that millions of years allows the emergence of complex structures, it does not mean that simpler lifeforms are not perfectly matched in the habitat where they are. Bacteria, algae, sharks, crocodiles, etc., have remained very similar over millions of years. Evolution is a process that started acting when life first appeared and continues to act in all organisms, including us, although we have changed the way in which natural selection works  (medical and technological breakthroughs, etc.).

SO IF WE COME FROM MONKEYS, WHY DO STILL MONKEYS EXIST?

The truth is that we don’t come from monkeys, we are monkeys, or to be more rigorous, apes. We have not evolved from any existing primate. As we saw in a previous post, humans and other primates share a common ancestor and natural selection has been acting differently in each of us. That is, evolution has to be viewed as a tree, and not as a straight line, where each branch would be a species .

Some branches stop growing (species become extinct), while others continue to diversify. The same applies to other species, in case you have asked yourself, “if amphibians come from fish, why are there still fish?”. Currently, genetic analyzes have contributed so much data that they make so difficult to redesign the classical Dariwn’s tree.

Evolution is a very broad topic that still generates doubts and controversies. In this article we have tried to bring to uninitiated people some basics, where we can delve into the future. Do you have any questions about evolution? Are you interested into a subject that we have not talked about? You can leave your comments below.