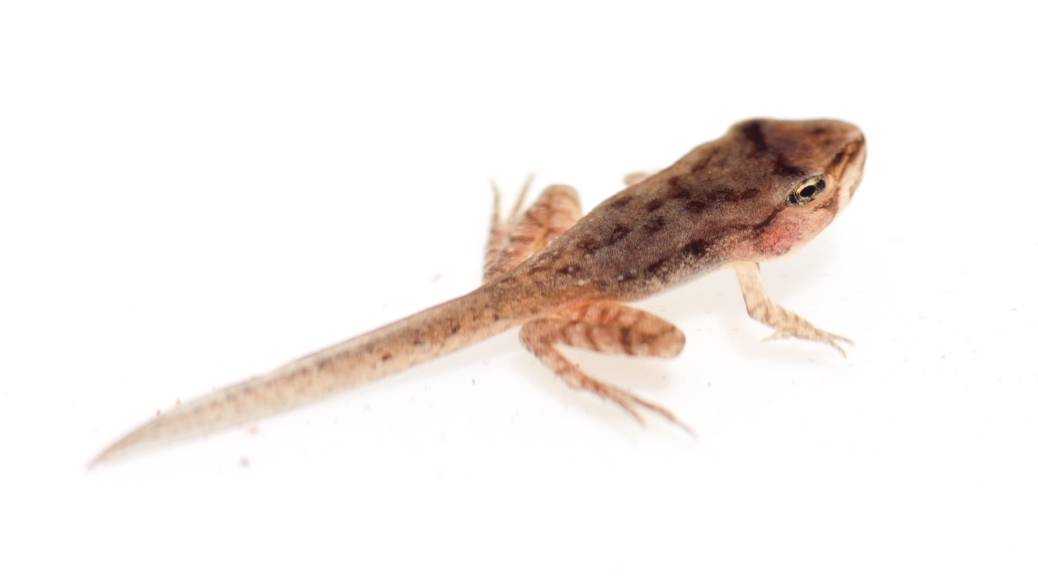 The word amphibian comes from ancient Greek words “amphi”, which means “both” and “bios”, which means “life”. Even if the word amphibious is an adjective used to describe animals that can live both on land and water, in the case of amphibians it also refers to both life stages through which these animals go through, as amphibians are born in an aquatic larval stage and become adults via a process of metamorphosis. In this new entry we’ll explain how metamorphosis works at a hormonal level, which anatomical changes occur during this period and the differences of this process among the different lissamphibian orders.

As a general rule, lissamphibians lay their eggs in water. In most species, aquatic larvae will hatch from gelatinous eggs, even if their morphology varies a lot between different species. Yet larvae of all lissamphibians present a set of common characteristics:

During metamorphosis, most structures useful during the larval stage are reabsorbed through apoptosis, a controlled cell death process. In many cases this process is highly conditioned by various environmental factors such as population density, food availability and the presence of certain chemical substances in water.

This is the larval growth stage, and it lasts around the first 20 days of life (depending on the species). This stage is characterized by a low secretion of thyroidal hormones and by a high concentration of prolactin that inhibits the metamorphosis process. This is due to the fact that the hypothalamus→hypophysis system is still not mature.

It’s a period of reduced growth with slow morphological changes, due to the rise of thyroxin concentration in blood caused by the growth of the thyroid gland. Also, the hypothalamus→hypophysis axis starts developing, which will trigger even more the rise of the thyroxin concentration and will lower the prolactin, giving way to great morphological changes.

It’s the point in which the hyothalamus→hypophysis→thyroid axis is at its maximum capacity and it is when great morphological changes happen in the larva, which will end up becoming a miniature adult. Finally, thyroxin levels will start to be restored by a negative feedback system of the thyroxin over the hypothalamus and the hypophysis.

During the metamorphosis process, larvae will go through a set of anatomical changes that will allow them to acquire their adult form. Some changes common to most species are the acquisition of eyelids and new retinal pigments, the reabsorption of the gills and the loss of the lateral line. Other morphological changes vary among the different orders. For example in caecilians (order Apoda) larvae already look like miniature adults but with external gills. Also, most caecilians present internal metamorphosis and the hatchlings have no trace of gills.

In urodeles (order Urodela), the external metamorphic changes aren’t that spectacular either. Larvae are pretty similar to adults, as their limbs develop quickly, although they present external filamentous gills, have no eyelids and present a largely-developed caudal fin. Even their carnivorous diet is similar to that of the adult’s. Yet the great diversity of salamanders and newts gives as a result a great variety of life cycles; from viviparous species that give live birth, to neotenic species that keep larval characteristics through their adult stage.

Frogs and toads (order Anura) are the group in which metamorphic changes are more dramatic. The anuran larva is so different that it’s called a tadpole, which differentiates from the adult both by its looks and its physiology and behaviour. Even if tadpoles are born with external gills, these are soon covered by skin folds that form a gill chamber. Also, tadpoles have a round, limbless body and a long, vertically-flattened tail, which allows them to swim swiftly in water.

One of the main differences between adult and larval anurans is their diet. While adult frogs and toads are predators, tadpoles are herbivorous larvae, feeding by filtering suspended vegetal particles or by scraping off algae from rocks using a series of keratinous “teeth” present in some species. This is reflected in their spirally-shaped and extremely long digestive system in order to allow them to digest large quantities of vegetal matter. Tadpoles are tireless eating machines, with some filter-feeding species being able to filter eight times their body volume of water per minute.

After metamorphosis, tadpoles will reabsorb their gills and tail, their digestive system will shorten, and will develop limbs and lungs, becoming small amphibians prepared for a life on land.

As we have seen, the metamorphosis process varies greatly among the different species of each order. This process results in the fact that that most lissamphibians spend a part of their lives in water and the other on land, a representative fact of the transition of the first tetrapods from the aquatic to the terrestrial medium. Also, the great diversity of ecological niches occupied by both the adults and the larvae of the different species and the wide array of environmental factors that affect the metamorphosis process, make lissamphibians great bioindicators of an ecosystem’s health.

The following sources have been consulted during the elaboration of this entry: