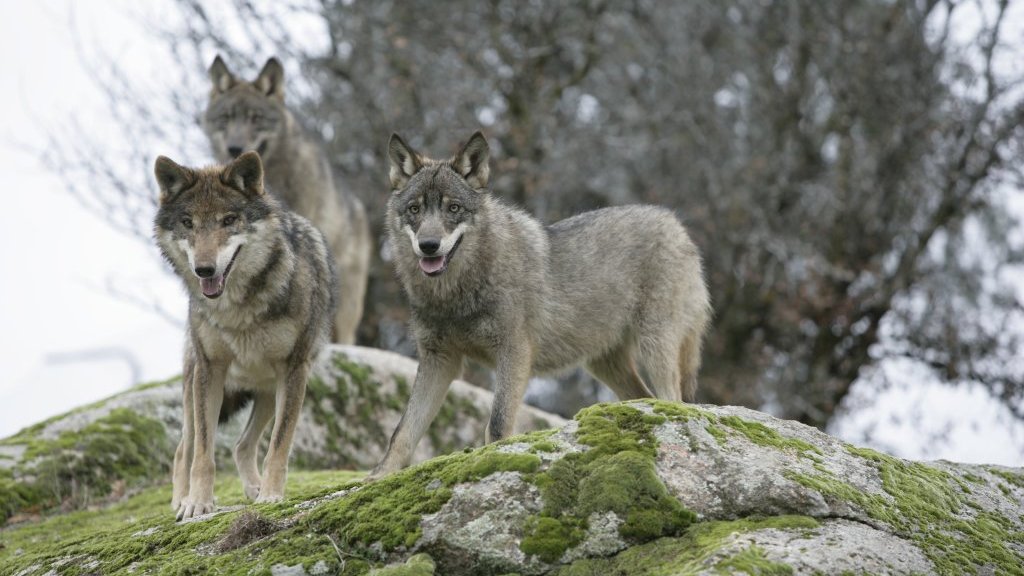 The wolf is one of the most iconic carnivores, especially in Spain. However, an unwarranted bad reputation kills hundreds of individuals a year. Find out in this post more about this wonderful animal and the conservation efforts that are currently being made with the Iberian wolf.

HOW MANY WOLF SPECIES EXIST?

The wolf or gray wolf (Canis lupus) is the largest wild member of the family Canidae. It was the carnivore with the world’s largest area of distribution, but now it has been reduced drastically by human pressure. Canis lupus has about 32 subspecies and it is considered least concern in the IUCN red list globally, but locally it is listed as endangered. As we saw in a past post, the dog (C. lupus familiaris) is subspecies of the gray wolf .

Wolves are social animals: their survival and success as a predator depends on their organization in packs (8 to 12 members). The hierarchy within the pack is based on a breeding pair (usually a lifelong couple) and the other members cooperate in hunting and caring for the young.

In a pack, members maintain extensive territories by olfactory and acoustic tags. The howl of the wolf is used to announce their presence and defend territories. It can be heard up to 10 km away and allows rival packs stay away and avoid confrontations. It is also used to communicate and strengthen ties within the members and to express emotions.

They are adapted to walk and run long distances in search of prey in a variety of terrains (forest, meadow, snow…) and are also good jumpers while running. Its great smell, good sight (diurnal and nocturnal thanks to the tapetum lucidum) and impressive teeth makes them effective predators. In addition, the group hunting allows them to kill prey up to 10 times its weight. Once it is tumbled, members wait their turn after the dominant pair has feed on it. In case of shortage of food, wolves can scavenge dead animals and even practice cannibalism.

From January to April, the dominant female gives birth to 4-7 cubs. After a month of breastfeeding, the cubs leave the burrow and feed on food regurgitated by their parents and other members of the group. If the food is abundant, after 3-5 months the cubs are ready to travel with the rest of the group. The next breeding season, some youth will abandon the pack searching for mates and territory.

The Iberian wolf is found exclusively in the Iberian Peninsula. Its scientific name “signatus” refers to the signs in their fur that differentiate it from Eurasian wolf (Canis lupus lupus).

The Iberian wolf packs has fewer individuals (up to 7 and often only a couple with a subadult) due to the smaller size of the prey and food availability (roe deers, sheeps, mountain sheeps, rabbits).

If you want to know more about the iberian wolf you can download the app iFelix (in spanish) listed here .

DISTRIBUTION AND ROLE OF THE WOLF IN THE ECOSYSTEM

In the early twentieth century the wolf was distributed throughout all the peninsula. It has now been restricted almost to the peninsular northwest and around 2,800 individuals in total exist. The year 2000 the wolf reappeared in Catalonia, which could give the impression that the Iberian wolf was expanding, although genetic analysis in a 2011 study showed that came from the Italian-French lineage and only 13 different individuals were identified.

Large predators are essential for the survival of biodiversity of ecosystems. The wolf is a key species in this role, because its influence is greater than other species. This is due to its ability to modify the density and performance of dams and its interactions with other species, as scavengers. An example is this viral video in which the presence of the wolf ultimately led to the modification of the river in Yellowstone:

Iberian wolf threats are basically due to humans:

LEGAL STATUS OF THE WOLF IN SPAIN

According to the Red Book of Vertebrates in Spain the wolf is listed as vulnerable. However, populations at north of the Duero River can be controlled hunted and beated in exceptional cases, even during the breeding season. Only the municipality of Muelas de los Caballeros wants to ban hunting considering the wolf as an “emblematic species”. In Portugal conservation is somewhat higher, but when wolves cross the border are hunted indiscriminately in Galicia and Zamora, disabling conservation efforts in the neighboring country.

By contrast, the populations of southern Duero are protected by the Habitats Directive of the EEC and by various laws of the Spanish state. However, in April 2016 the government suggested removing this protection, but it has not succeeded. So a river separates the wolves that can be hunted and prosecuted from those who are protected. But if you look at the distribution map, this protection at south of the Duero may be useless, because probably there are no remaining wolves in that area.

The Juntas de Extinción de Animales Dañinos existed in Spain between 1954 and 1968. Their goal: to offer economical rewards to kill species that were detrimental to hunting and livestock. In that period, 196,147 animals were killed (the numbers are probably higher than reported), including 1,470 wolves. Today there are still people who claim the return of the varmint killers.

Currently it is estimated that each year about 500 wolves die because of legal and illegal hunting, poisoning and vehicle collisions. The greatest enemy of the wolf is the atavistic fear and hatred aroused among people living with they, and the few or inexistence interest of administrations: they do not allocate enough money to offset the economic losses that the wolf may cause farmers.

As we have seen, nearly 90% of the wolf population live in Castilla y Leon and Galicia. In Galicia they live in areas with high human density, which forces them to feed mainly on cattle and debris dump. There is a belief that wolves kill for killing, because they attack more sheep than they can feed. It is totally false that wolves kill for pleasure. According to some authors, this corresponds to an ancestral behaviour, not yet lost, to forecast food supplies for periods of scarcity. Others argue that responds to the fact that when the wolf is preparing for the hunting, enters into a state of tension and excitement necessary to bring down wild animals. But as sheep dont’ try to defend themselves or try to scape, the wolf releases this excitement the only way it knowns.

As the bear and lynx have different conservation plans, the wolf has none. Most regions with the presence of Iberian wolf have to subsidize farmers who suffer economic losses due to wolf. However, some offsets aren’t paid until four years later or they are not implemented at last, and the authorities do not meet the demands of farmers. By contrast, some farmers resort to fraud to take advantage of such compensations. Real conservation policies and the application of subsidies and penalties are necessary to ensure the survival of the Iberian wolf in Spain, an animal that is becoming depleted.