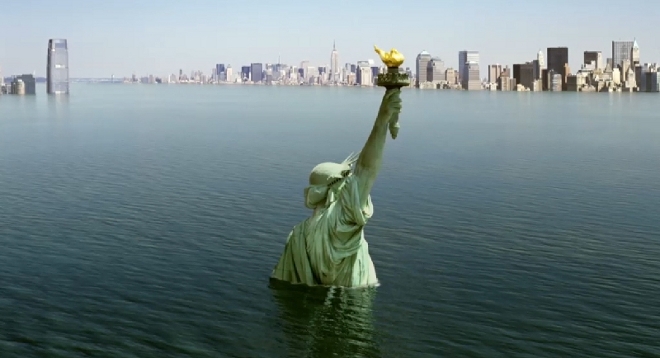 This week the topic is a worldwide problem favoured by human action, which is one of the several consequences of global change. Effectively, I’m talking about sea-level rise.

Since the end of the last ice age to the present day, sea-level has risen by about 125 meters. The causes of this sea-level rise have both a natural and human origin, despite the human-induced greenhouse effect is intensifying this process.

WHAT IS IT AND WHICH ARE THE CAUSES?

The sea-level rise is one of the worst consequences of global change. The coastal areas are the most densely populated of the world, so two thirds of the Earth population live in the first 8 km from the coast. They are especially vulnerable to the impacts of global change due to the presence of major agricultural zones, conurbations and heritage sites.

Sea-level is determined by natural and human-induced green house effect. Specialists distinguish between:

TO WHAT EXTEND SEA LEVEL WILL RISE?

Sea level can change by 10 meters or so within the course of a few centuries and can fluctuate by more than 200 meters over millions of years. During glacial periods, sea level reduces due to the formation of big ice sheets on the continent, while in the interglacial periods its melting causes a rise in the sea level.

Nevertheless, if we compare the sea-level rise of this last century with the almost constant level of the last 6000 – 8000 years, we can observe a rise of 18 cm in just 100 years and 3.2 cm in the last decade. Experts believe that between 15 and 50% of sea-level rise is attributed to the temperature-related expansion of seawater, that 25 – 45% is caused by the melting of mountain glaciers outside the polar regions, and between 15 and 40 per cent is caused by the melting of the Greenland and Antarctic ice caps.

Sea level will significantly rise by the end of this century, although the precise extend to which it will increase is uncertain. The Intergovernmental Panel on Climate Change (IPCC) considers a rise of up to 1 meter during this century (dark green shading in the picture), while other researchers forecast a rise of more than 180 cm (light green shading in the picture). If most of the ice sheets in Greenland and West Antarctica melt, sea level could increase by as much as 20 meters in the following 1000 years in a worst-case scenario. The last time that the Earth had a similar temperature to the predicted in 2050, sea level was 4 meters above the nowadays level.

If you find it interesting, we really appreciate that you share this post in the Social Networks to allow more people to read it, so the goal of the blog is the science dissemination.