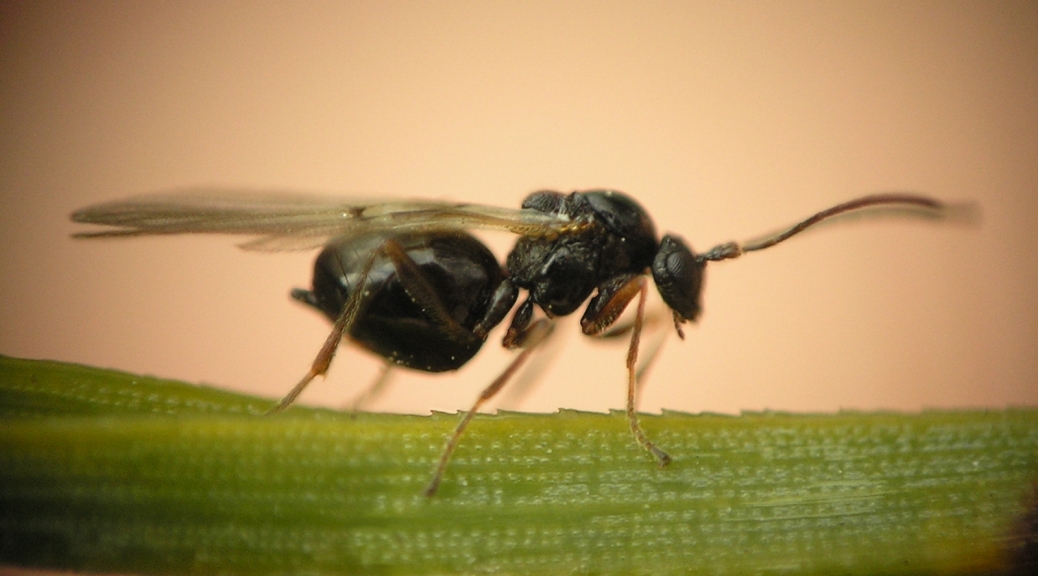 Popular knowledge about trophic relations established among vertebrates tends to eclipse the existence of little systems sometimes way more complex than those observed either on mammals, reptiles or birds. This is the case of gall wasps or gallflies, a family of micro-wasps able to induce a wide variety of tumours known as galls in different groups of plants. Despite most people have sometimes heard about these organisms, they probably don’t know that there exists a frantic fight between different groups of insects inside these tumours.

Do you want to know more about the mysterious world inside gall wasps’ galls? Keep reading!

What are gall wasps?

Gall wasps or gallflies (Family Cyinipidae, Order Hymenoptera) are a family of plant parasitic micro-wasps that barely reach a few millimetres length. They belong to the Parasitica group inside Hymenoptera order, so females haven’t their ovipositor transformed into a sting like other wasps. In this case, this organ preserves its exclusively reproductive original function.

Female gall wasps use their long ovipositors for laying eggs inside host plant tissues (usually oaks and other species from the genus Quercus).

Gall wasps are phytophagous insects, that is, they feed on vegetable tissues only. So, this takes them away from most of wasps, which are usually carnivorous or parasitoids of other insects.

But the most distinctive trait of these organisms is, without a doubt, their capacity to induce tumour or gall development on plants.

The same way birds construct nests or beavers construct dikes, some gall wasps ‘construct’ their own galls. But unlike nests or dikes, galls aren’t actively constructed by gall wasps but induced as a consequence of their activity and interaction with plant tissues.

Despite there are more arthropods able to induce galls formation, gall wasps are the ones that induce the most diverse, complex and evolved typologies of galls known until the date, especially on Quercus (oaks and relatives).

Moreover, there exists a close relation between galls wasps and plants, so almost every species or genus induces a specific gall typology. Because of this, in the same way as nests and dikes galls are considered an extended phenotype of gall wasps (that is, a characteristic trait of an organism that manifests outside its body but that allows its identification).

How are they formed and what is their function?

Galls are result of a totally or partially deformation and an extreme growth of different plant tissues, such as leafs, leaf nerves, stem or fruits.

Usually, gall formation doesn’t necessarily affect plant production and growing, except when they undergo a massive developing on plants surface that causes serious damages on their tissues. In these cases, gall wasps can become terrible pests (e.g. the chestnut gall wasp, Dryocosmus kuriphilus, a species native of Asia that has become a pest on chestnuts from Europe).

Molecular basis driving gall formation are currently unknown. However, it’s known that this process begins at the time females inoculate their eggs inside plant tissues.

From this moment on, galls begin to grow more and more around the eggs until they get enclosed inside one or different chambers. Inside these chambers, larvae feed on nutritious tissues from the gall while being protected from external damages. The movement and activity of larvae promote gall growth.

Once adults are completely developed, they travel through the gall tissue to reach its surface. This process can take them a lot of time and a big waste of energy. Usually, adults don’t feed and dedicate their short life to mate.

A miniature and complex trophic net

Usually, galls harbour a rich variety of arthropods besides the wasps that have induced their development. Some of them feed on nutritious tissues induced by other gall wasps to complete their life cycle; others live as parasitoids of different species of gall wasps and cause their death; besides, there are some of them that develop only during the late states of galls life.

So, the inside of galls is the scenario of a miniature and complex trophic net and that of a survival battle between different groups of arthropods:

These group of gall wasps are able to induce galls formation de novo. They usually have a strong body, the radial cell of the anterior wings opened in its upper margin and the abdomen with well differentiated segments (typical characters of the tribu Cynipini, one of the most abundant groups of true gall wasps).

Some gall wasps have lost their ability to induce the formation of galls. These are known as inquilines, and their larvae develop inside other gall wasps’ galls while feeding on their tissues. So, inquiline females lay eggs inside galls in formation. Despite inquilines aren’t able to induce galls formation de novo, they can alter its development.

Relation between inquilines and true gall wasps is a specific type of cleptoparasitism known as agastoparasitism, because inquilines larvae “steals” the nutritious tissues from the gall they occupy. Inquilinism of gall wasps is an obligatory relationship for inquilines, because they need other gall wasps’ galls to complete their life cycle.

Usually, this relationship doesn’t affect neither negatively nor positively true gall wasps, except when larval chambers of both groups are near from each other. In this case, the faster development of inquilines and their competition for food could finish with true gall wasps’ life. If this happens, the only adults that would emerge from galls would be that of inquilines (lethal inquilines).

Parasitoids form one of the main groups of arthropods that develop inside galls. The most of them belongs to the family Chalcidoidea (order Hymenoptera), that is totally made up of parasitoid wasps.

Parasitoids from galls inoculate their eggs inside larvae of different gall wasps using their long ovipositors. So, it’s expected that the only adults that will emerge from a gall attacked by parasitoids will be the parasitoids themselves.

Nowadays, there exist programs for managing gall wasps’ pests which contemplate the use of parasitoids, such as Torymus sinensis to fight against the chestnut gall wasp.

This category includes a wide variety of different arthropods that develop inside galls at the late stages of its lifespan, acting as secondary successors: beetles, butterflies, flies, thrips, etc. These organisms usually develop once all gall wasps have emerged from galls.

Sometimes, nature can be more complex than we could imagine, and the case of galls is only an example. From now on, when you go out for a walk, remember that even in the tiniest spaces, there exist very complex and developed systems plenty of rich and diverse relations.

Most of the information has been extracted from my Master’s degree final project (University of Barcelona, 2015-2016), titled “Separation and identification of inquilines from the genus Synergus (Fam. Cynipidae, Hymenoptera) from galls developed on Mexican species of Quercus”.

Some of the most remarkable studies consulted were the ones that follow: