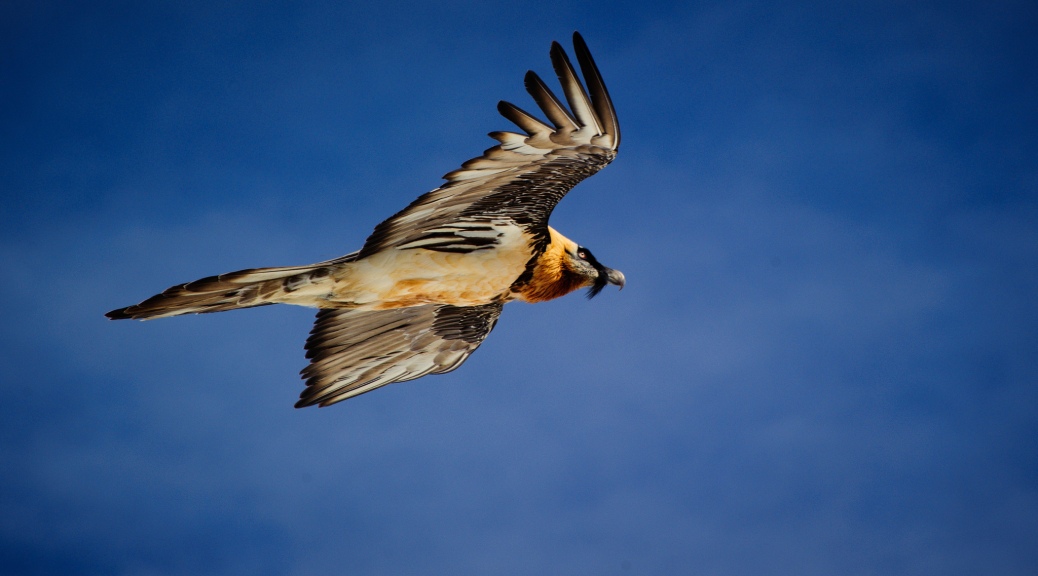 The bearded vulture (Gypaetus barbatus) is a diurnal bird of prey popularly included in what is called vultures, scavenger and ghoul birds (they feed on dead animals). However, the bearded vulture is quite different from other vultures:

In this video (5 minutes, catalan) you can see bearded vultures in flight, breaking bones, engulfing them, raising a chick in the nest and bathing in mud.

Bearded vultures nests on ledges and natural rock caves in the mountainous and rugged areas where they live. They have stable partner for life from age 7 and the reproductive cycle has different stages:

In the Iberian Peninsula is found naturally only in the Pyrenees (Catalonia, Aragon and Navarra). Spain is the European country with more breeding couples registered (about 130, 2014 data).

Bearded vulture populations are declining. It is ranked globally as“near threatened” in the IUCN Red List and “endangered” in the Spanish Catalogue of Endangered Species. Current threats they face are:

Due to the limited distribution of populations, their low number and difficulty to colonize new territories, in 2014 thirteen autonomous communities signed a protocol for the recovery of vultures in Spain. The most prominent action of this protocol is to strengthen the National Strategy for the Conservation of the Bearded Vulture in Spain (started in 2000) and the Programme Captive Breeding (2001), with actions such as the revaluation of rural areas, supplementary feeding and support for traditional farming practices. This strategy also involves the reintroduction in historic areas where the bearded vulture has been extinguished:

Hacking or rural upbringing is a technique that involves the release of captive-bred animals in an area that the bird assimilates as its birthplace. If successful, the bearded vulture returns to settle and breed. This technique did not has a conservationist origin, since it was developed by falconers in the Medieval Age. Falconry (hunting with birds of prey) are also currently used for wildlife control at airports or cities.

In falconry hacking consists in lefting in an elevated cage chicks that can feed by themselves. Falconer feeds them without being seen. After a few days they open the cage, using it as a basis for learning to fly. They are still feeding them until they learn to hunt by themselves and leave the cage. The young ones connect the cage as its birthplace so it will always return.

The center managed by the Gypaetus Foundation is based on the natural breeding, with minimal human intervention. Parents raise and feed their young from the second week of hatching. To monitor the nests a video surveillance system is used.

Since 2006, 31 bearded vultures have been released from captive breeding and each one is tracked by GPS transmitters. Currently 15 individuals are still sending signals (9 were killed and 7 stopped working). As said in the introduction, the good news is that last month was born the first chick result of released individuals (Tono and Blimunda) by hacking technique.

For more information, check out this documentary (in spanish) about the bearded vulture and its conservation (El bosque protector. Fauna amenazada, El Quebrantahuesos, 29 minutes).