There are many groups of marine animals, like cnidarians, ctenophores, echinoderms or amphioxus, that are well-known, mainly because they are taught in school or because divers can enjoy their presence for its macro size. In this post, I am talking about 4 groups of marine animals that probably, unless you are a biologist or similar, you don’t know.

Placozoa is a group of marine animals that were discovered in 1883 in an aquarium of Austria. This group has been considered for a long time a phyllum with just one species, Trichoplax adherens, but a research from 2010 found 7 new possible species, with different geographical distributions.

The species is a flat (thickness between 0.01 to 0.015 mm) and small (3 mm) animal, without neither a particular shape nor symmetry. Its body present just 4 types of cells, but doesn’t include neither nervous, sensory or muscular cells. Trichoplax lives in the bottom of tropical and subtropical seas. To feed, it can withdraw its body surrounding the feeding particles in order to constitute a cavity, in which digestive enzymes (external digestion) are poured and then the digested particles penetrate into the body. Placozoa can reproduce both sexually by fission, fragmentantion or budding and sexually.

Gnathostomulida is a group of 100 species of small size (between 0.5 and 1 mm), with a worm-like shape and that lives in the sand of the bottom of the oceans poor in oxygen. Some curiosities are the absence of anus or it is temporary, the epithelium has just one layer of cells, normally have one penis, two testis and one ovary (hermaphrodite animals) and they produce one egg per lay. Despite its simplicity, Gnathostomulida has a nervous system with sensory cells, musculature and protonephridia to excrete liquids, but circulation and breathing take place for diffusion through the epithelium. They feed on bacteria and fungi.

Kinorhyncha is a group of 150 species with a size less than 1 mm. The body is covered by 13 plates of chitin (like insects and other arthropods), which are articulated between them. They can eat thanks to the presence of a trunk with spines, which is also involved in its movement. They present all the anatomical systems, but circulation and breathing is for diffusion. Their body is full of sensory cells: pigment pits to detect light and mechanoreceptor spines. Sexes are separated. They feed on detritus and diatoms. They live in the intersticial water of the sea bottom.

Until recently, Cycliophora was considered to include just one species: Symbion pandora. This animal lives on the mouth pieces of Norway lobster (Nephrops narvegicus). Males are tiny, so tiny that are sperm sacks, and live joined to females. Females have digestive system, a cilium crown and an adhesive disc in the base to join in the oral pieces. Reproduction is both asexual, forming a larvae known as pandora, and sexual, with a larvae known as chordoid, which always gives females. Other species are Symbion americanus, which lives on the American lobster (Homarus americanus); but it could be more species (still not described and named), that would live on other crustaceans. 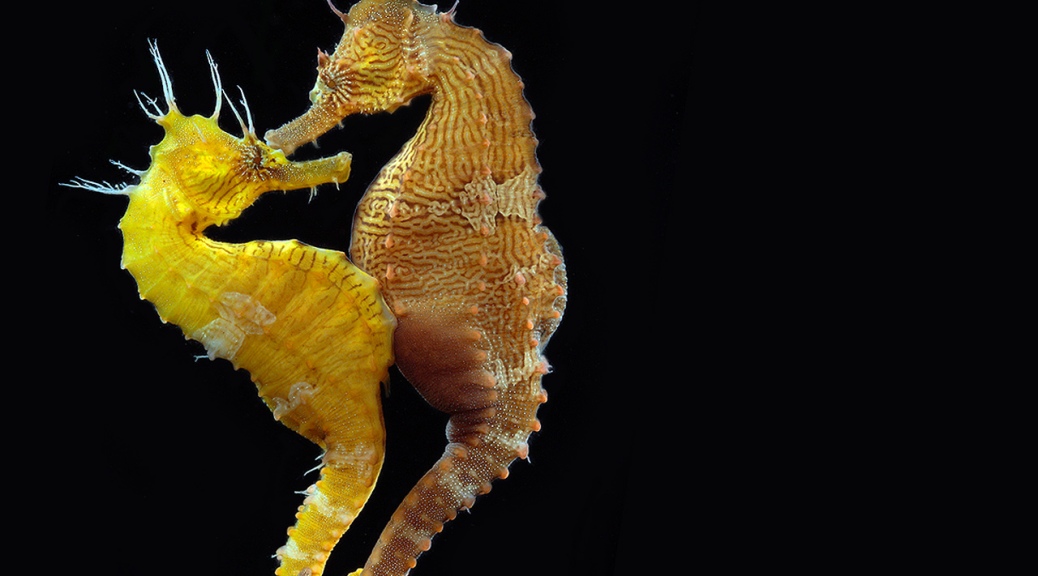 Little by little, we have been disclosing the wonders that hide seas and oceans of the world: cetaceans, sharks, jellyfishes, starfishes, marine turtles, nudibranchs, pyrosomids, ctenophora, coral, among others. Today we will know a little bit more about some animals with a curious shape: seahorses.

Seahorses, together with pipefishes and the leafy, ruby and weedy seadragons, constitute the Syngnathidae family. They are small fishes with a long body, which present a unique feature: females lay the eggs inside a pectoral cavity of male, where are fecundated, and then they are released. Watch this video of a male seahorse realising the small seahorses:

These animals live in coastal waters of tropical and subtropical seas, what include Mediterranean sea, mainly in algae and Posidonia. In the Mediterranean, we can find three genus of Syngnathidae:  Hippocampus, Syngnathus y Nerophis; but here we will focus on the first one, which corresponds to seahorses.

Seahorses, which use the tail like a tiller and to hold on to objects, maintain their vertical position thanks to an organ that allow their buoyancy called swim bladder (present in all fishes) and the tail. All seahorse species are included in the genus Hippocampus, with about 50 species. They feed on small invertebrates, mainly crustaceans present in the plankton. When the prey is close, its mouth acts as a hoover.

The short snouted seahorse, with a brown grey colouration, present a short snout and they lack appendixes in the head and back. They can measure 15 cm. They live in sandy and detritus sea-floors till 10 m deep. When a female wants to introduce the egg mass inside the male, they do not hold on each other. Males release the little seahorses after 4 weeks. Their conservation status is unknown.

This seahorse, different from the other one, presents long snout and abundant appendixes in the head and trunk. They can also measure 15 cm long. They usually live in seagrasses, but is quite difficult to see them. In this case, the male and the female hold on to each other when she wants to introduce the egg mass in the male. Its conservation status is also unknown.