Just as explained in the article “Technology to the rescue of data” the OBSEA platform is an underwater observatory placed on the Catalan coast. The aim of this article is to provide a general description of the observatory, the sensors and a brief comment of the studies and uses that are being done currently.

The OBSEA (Western Mediterranean Expandable SEAfloor OBservatory) is an underwater observatory designed, deployed and managed by the technologic group SARTI from the Universitat Politècnica de Catalunya (UPC). It is placed 4km off Vilanova i la Geltrú coast at 20m depth, in a fishing protected area, and has an optical fibre cable connecting it to the terrestrial laboratory that provides the required energy for the correct performance of the different sensors and allows a transmission of data from the platform to the lab. Thus the information is received in real time and the problematic related with instrumentation powered by batteries is avoided. Furthermore,  it also allows to the engineers of the SARTI to make software modifications and checkings of the electronic devices with no need of taking out of the water the observatory.

The whole electronic system is installed in a watertight cylinder for protecting it, and the instrumentation connections, from short-circuiting. At the same time, this cylinder is placed inside a metallic structure that protects it from external factors and fixes it to the seabed.

One of the most important sensors when studding the ocean is the CTD (Conductivity Temperature Depth), it is used in multitude of studies, from biologic to physic. With this device one can get direct information about temperature, conductivity and pressure, and other parameters can be calculated: salinity from conductivity, depth from pressure,…

Two video cameras provides images in real time of the observatory surroundings. Meanwhile one has an axis rotation of 360º the other one is fixed in one position. These cameras allow the realization of very different projects, from biologic and behavioural studies of the fauna linked to the observatory and its environment, to projects focused on the citizen participation on the scientific world, through the identification of the species that appear on the images, and are the key factor of a group in Facebook where the users post peculiar images pictured by these cameras and the scientist answer the questions presented.

A hydrophone gets and characterizes acoustically ambient noise and, thanks to a specific software, is a capable of discriminate between biologic and anthropogenic noise. This sensor is currently used by studying the cetaceous of the area and the possible relation between the fish assemblages living around the observatory, the cetaceous (predators) and the maritime transit.

The AWAC is a current profiler and a wave measurement system, it allows the measurement the speed and direction of the water at different depth, from the seabed to the surface. It is also capable of differentiate between different types of waves: long storm waves, short windy waves or waves generated by ship.

The observatory also has installed a seismograph prepared for detecting any tectonic movement produced anywhere in the planet. The obtained data is checked with a universal database in order of being referenced and verified. This seismograph was capable of detecting, among others, the seismic movements produced during the 2011 Japan earthquake and tsunami or produced for the platform of Castor Project (Catalan coast).

Finally, it is of relevance the extension of the OBSEA, a buoy. This buoy is permanently connected to the observatory and has a complete meteorological station for measuring, among others, air temperature, wind speed and direction, atmospheric pressure,…

The OBSEA platform allows the obtaining of data from many different types (biological, oceanographic, atmospheric,…) and, more important, continuously and in real time. This functionality made the OBSEA a key tool in the development of the actual and future oceanographic studies.

If you enjoyed this article, please share it on social networks tospread it. The aim of the blog, after all, is to spread science and reach as many people as possible. 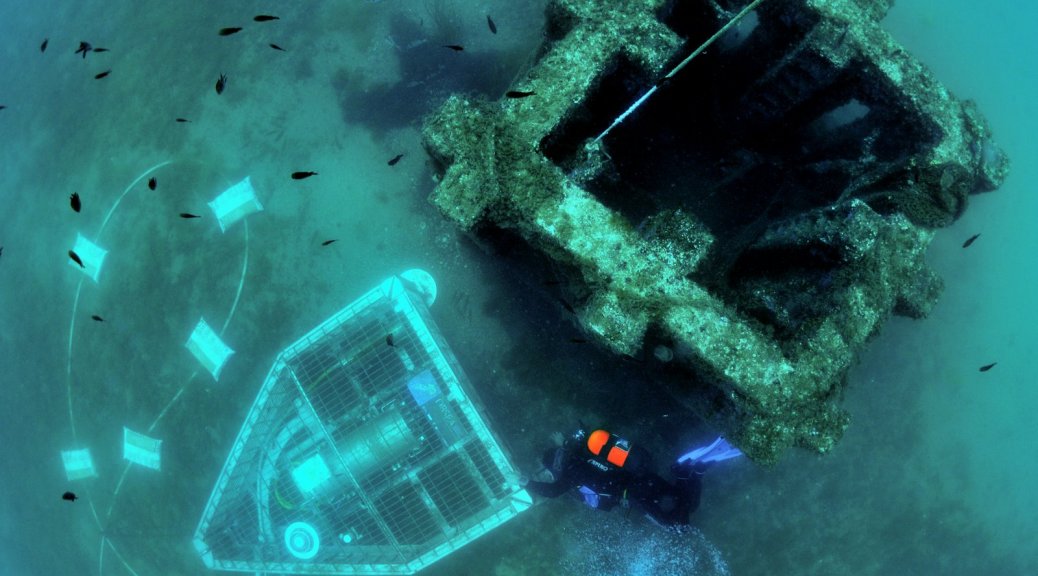 The purpose of this article is to show a general vision of the main problems of the traditional sampling techniques and the actual situation and advantages that the modern methods offer. More specific examples will be given in future articles in order to explain the running and some studies that have been using these new techniques.

In science is very important to have a good quality data in order to develop any study and not being criticized by editors and REVISORS of the SCIENTIFIC MAGAZINES. Frequency, number, type and sampling sensors are just the first ones of a long list of important factors that you need to have in mind when planning the sampling of your study. There is no magic trick, each study is different and requires number and sampling frequency… different, specific and optimum.

When you are trying to discover the marine mysteries the problems just get bigger, the accessibility is much more limited than in the terrestrial habitats and you cannot go sampling every time you desire, some days maritime weather conditions difficult sampling and, often, you are forced to cancel it, leaving an important data gap. Traditional sampling methods, even their evolution among the years, requires the presence in situ of the scientist, nowadays we are not using a simple thermometer anymore but a complex CTD that provide a much more precision in multitude of different parameters (depending on the sensors attached at the CTD), at the same time and at the desired depth, but we always need a ship, for going at the selected coordinates, and some operators for raising and lowering the sensor. Moreover, biological sampling traditional techniques (trawling and longlines, among many other fishing arts, as well as direct observations via scuba diving) present another huge problem: they are very invasive methods, not just for the species itself but, many times like with bottom trawling method, for the environment, furthermore, the animals captured usually die during the manipulation process. Notice that, for being invasive methods (nets, ships, scuba divers,…), the correct study of the animals normal behaviour is affected, due to the response of the fish towards these invasive presence.

Recently, new different revolutionary sampling methods (Autonomous Underwater Vehicle and Cabled Underwater Observatory) have been implanted in order to reduce the above-mentioned problems. In the two given examples we find a set of sensors, adaptable to the desired study, installed in a small space. While AUV allow an automatic, or remote control, movement towards exact coordinates and, in some cases, are able to send the collected data via satellite, submarine observatories are fixed at the seabed becoming just one more element of the environment and producing no perturbation in the normal behaviour of the animals. Due to the connection via cable they can receive permanently energetic supplying without relying on the batteries duration, and send the collected data at real time. Therefore, the new technologies allow us to increase sampling frequency since the dependency on the climate conditions become much less important unlike the above-mentioned case of the scuba divers. However, the disturbance does not decrease when working with AUV, as well as the complications in studying animal behaviour.

Cabled underwater observatories are slowly colonizing the coast around the world either forming big networks or individual observatories.

Nowadays, the more powerful observatories are the Canadian VENUS and NEPTUNE, both of them managed by the Ocean Networks Canada.  The first one was deployed on the 2006 and consists of 3 nodes placed between 100 and 300 meters deep in the Salish Sea, British Columbia, Canada. In addition to its function of studying the oceanographic phenomena it was also used as a test site of what would be its bigger brother, the NEPTUNE. This second network is working since 2009 and consist of 6 nodes and multitude of different sensors distributed on the oceanic profile of the Vancouver Isle west coast, from 23 to 2660 meters deep. For being placed over the fault produced due the interaction between the Juan de Fuca the Nord-American tectonic plate, it is an important observatory for the study of the plate tectonic forces.

In Europe, we are not lagging behind, the EMSO (European Multidisciplinary Seafloor and Water Column Observatory) has grouped the isolated observatories, either underwater platforms or pelagic buoys, with the objective of forming a multidisciplinary network at European level.

One of the members of this European network is placed in the Catalan Coast, the OBSEA. The OBSEA platform (Western Mediterranean Expandable SEAfloor OBservatory) is a cabled video platform located at 20m depth, 5 km off Vilanova i la Geltrú. It was designed, deployed and managed by the technologic group SARTI from the UPC (Universitat Politècnica de Catalunya), conceived as a platform capable of supporting many different sensors in order to monitor different oceanographic parameters (such as temperature, salinity, seismic waves, tides heigh,…), and is also an instrumentation test site within the EMSO. The observatory is equipped with two video cameras, one fixed and the other with a 360º rotation angle, which can acquire digital images of the environment surrounding the OBSEA and everyone can check those live images from the OBSEA website.

New sampling methods help the researches to get a lot of good quality data for achieving a better understanding of the oceans. Sometimes however, the sampling frequency is so high that the amount of data produced is bigger than can be processed and we have to develop new software capable of working with big volume of data and help us in their manipulation and interpretation.

If you enjoyed this article, please share it on social networks tospread it. The aim of the blog, after all, is to spread science and reach as many people as possible.