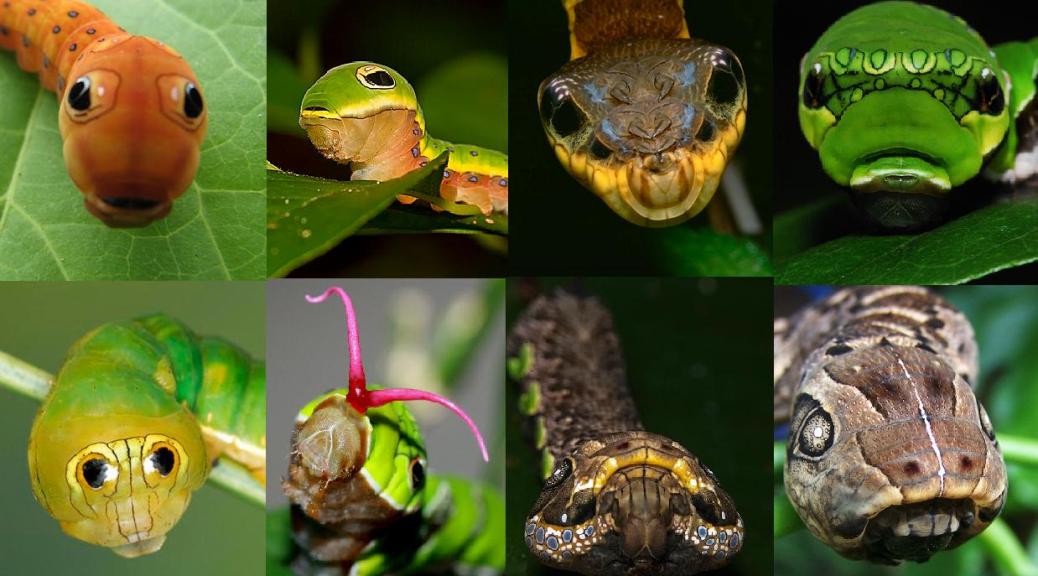 What do you see in the picture above? Maybe snakes… or maybe not? All animals try to enhance their survival rates, and one of the most effective ways to achieve this goal is by looking similar to some environmental elements, either by camouflaging or by imitating traits from other organisms. Mimicry is a complex and surprisingly phenomenon present in almost every animal taxa acting as an evolutionary driving force. Do you know what types of mimicry exist and which animals do perform each one? Are you ready to read more about this topic? If that’s the case, keep reading!

Mimicry vs camouflage (or crypsis)

The word mimicry (that derives from the Greek term mimetikos = “imitation”) was firstly being used to describe people who have the ability to imitate. From 1851 on, its use extended to other life forms.

Sometimes, the term mimicry is used as a synonym of “camouflage or crypsis”. Although these two words are sometimes confused and used equally, from a biological point of view they are well differentiated terms:

Some authors consider that camouflage includes only to the ability an animal has for imitating morphological traits from some environmental elements, such as different natural surfaces, plants or even sessile animals (i.e. immobile animals) like corals and sponges (as you can see on the picture below). On the other hand, mimetic animals go further and try to imitate not only morphological traits, but physiological and behavioral, looking for a response from other animals.

To sum up: the main objective of mimetic animals is to trick the senses (e.g. sight, hearing, smell…) of the other organisms they live with, in order to induce them a specific behavior that gives mimetic animals a benefit in return.

The defensive mimicry is specially performed by animals that have lots of predators, so their survival rates depend on avoiding their predators.

Venomous and poisonous animals tend to develop flashy traits (especially flashy morphological traits, like coloration and menacing sounds) which alert other animals about their danger. This phenomenon is known as aposematism (when an animal has a flashy coloration we talk about aposematic coloration). In the Batesian mimicry, the mimetic organism (that is usually harmless and edible) copies the flashy traits of a venomous or poisonous organism present in its habitat in order to make predators think it’s a harmful species. Thus, the mimetic organism avoids being caught and eaten by predators.

Sometimes, there are various poisonous or venomous species coexisting at the same time in the same habitat that are all being very hunted by predators (and sometimes by the same predator). In some of these cases, even when only one of these species has an aposematic trait to dispel predators, the rest of them try to mimic it and develop this trait (or traits). In contrast with de Batesian mimicry, in this model all species are harmful at some degree.

Try to think that all these species finally develop the same aposematic coloration: when predators prey on one of these species and are harmed in result, probably they won’t attack again any species that has the same coloration pattern. Thus, predation pressure will be distributed within the species matrix.

This is an unusual type of mimicry (only a few cases in snakes are known), and it occurs when a harmful species copies an aposematic trait (e.g. coloration) of a less dangerous organism. What could this mechanism be useful for? 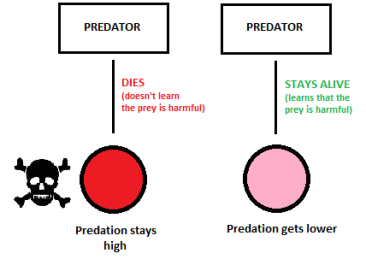 In the picture above, we can see that predators that feed on a harmful organism die (e.g. because it’s poisonous), so that the information “this animal is poisonous and mortal, don’t eat it!” won’t be transmitted to the rest of the predator population nor the next generations of predators. Thus, this harmful prey will remain preyed by predators. On the other hand, predators that feed on a less harmful prey and stay alive will have the chance to transmit this information to the rest of the population, so that predators will stop feeding on this prey.

One of the most important types of mimicry within the non-defensive mimicry is the Peckhammian mimicry.

Unlike defensive mimicry, in this case are predators (or parasites) the ones that develop the traits of a more or less harmless species (or even of a beneficial one) in order to be unnoticed by their preys or hostages.

Aggressive mimicry can be confused with some camouflage or crypsis mechanisms, as sometimes these two terms can be overlapped or maybe show no evident differences. This is the case of some abyssal fish species which have one or more filaments of their dorsal fins transformed into lures (sometimes these lures are bioluminescent). These lures sometimes mimic the shape of the abyssal fish’s preys, so those preys feel strongly attracted by them. Some authors propose that preys could be the model organisms and that abyssal fishes would modified their dorsal fin through an evolutionary process.

A curious case: the automimicry

The automimicry (also known as intraspecific mimicry) is a special case of mimicry that takes place when an organism transforms some part of its body in order to seems like another part of its own body or even of the body of another member of its species (e.g. a male that mimics a trait from females). The objectives of this type of mimicry are to obtain some benefit from other organisms or maybe to be unnoticed by their predators or preys.

Mimicry is one of the processes that makes animals to evolve faster (do you want to learn more about evolutionary processes? Enter this link!).

These changes may occur in a higher or lower speed. So, what about those animals that mimic other organisms? Mimetic animals are in constant selective pressure to look more like their models in order to go unnoticed and improve their survival, but at the same time imitated organisms (the models) are also under selection to sharp their ability to discern between models and imitators.

Thus, mimicry is an incredible evolutionary engine: a perpetual struggle between mimetic organisms and imitated ones in order to improve their respective survivals.