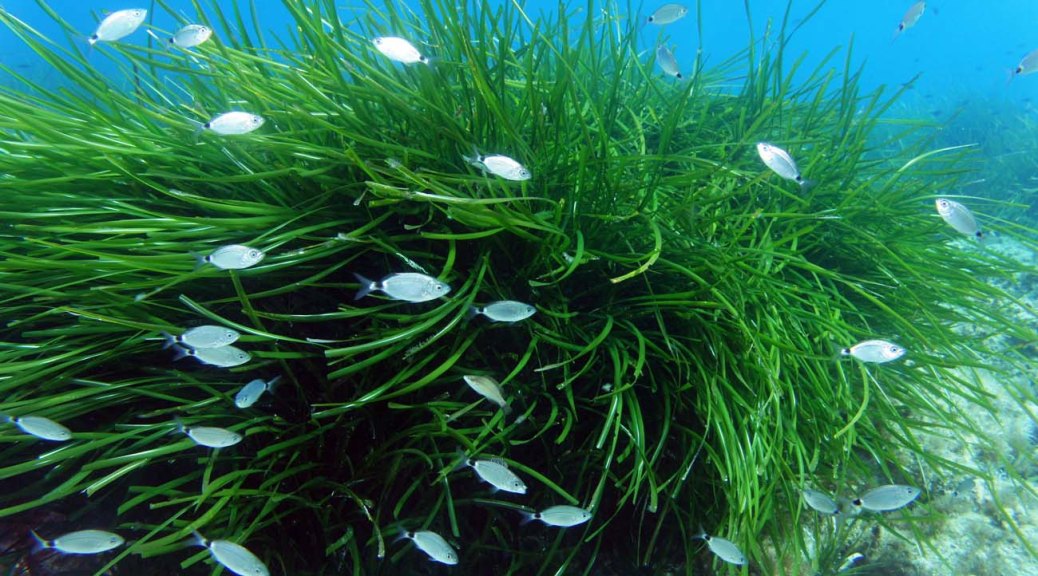 Posidonia and other seagrasses are one of the most important marine ecosystems on Earth. Many dare to categorize them as the jungles of the sea, for its high biodiversity. It is what we are going to see in this article, especially focusing on the Posidonia oceanica‘s meadows!

WHAT ARE MARINE PHANEROGAMS?

The seagrasses are plants that colonized coastal marine environments, being present in all oceans and seas, except the Antarctic. There are about 66 species.

All have a similar pattern: a horizontal underground rhizome (a thick buried stalk), from which are born the roots and vertical ramifications from where emerge leaves.

Throughout evolution, they have acquired the necessary adaptations to live in an environment with a high concentration of salts. They have the ability to perform underwater pollination by little flowers, in addition to reproduce asexually.

As we have already mentioned, we will focus on Posidonia oceanica, an endemic species of the Mediterranean Sea. It has the typical structure mentioned above, but among its peculiarities there are leaves of 0.5 cm wide and one meter long, grouped in bundles of 4-8 leaves.

In just one square meter can be 10,000 leaves. As a result, the particles that fall to the bottom are trapped and form what is known as “matte”, a very compacted substrate that rises slowly (10-18 cm/century), which acts as a barrier against the waves, favouring the formation of beaches. Do you want to know why we are losing beaches?

Did you know that on the island of Formentera (Balearic Islands, Spain) there have been found an individual of Posidonia older than 100,000 years?

Posidonia meadows and other seagrasses are ecosystems with high biodiversity. In addition to the organisms living permanently, others reproduce, put the lay or refuge there. There have been described about 1,000 species in them.

Despite the high associated biodiversity, only few species are able to feed on the plant. Examples include salema progies (Sarpa salpa), the green turtle (Chelonia mydas), some sea urchins such as Paracentrotus lividus … all with symbiotic bacteria in the digestive tract.

There are many algae and animals that live attached to the leaves or rhizomes, called epiphytes. Examples include the hidrozoa Aglaophenia harpago and the bryozoan Lichenopora radiata. But undoubtedly the most characteristic epiphyte animal on Posidonia is Electra posidoniae. This bryozoan form a narrow structure above the plant’s leaves.

Logically, there are also animals moving on the leaves. These are small animals that feed on epiphytes, such as crustaceans, gastropods (snails and slugs); polychaete, flatworms, nematodes and echinoderms. Examples are the nudibranch Diaphorodoris papillata and the crustacean Idotea hectica.

One of the most characteristic animals of the Posidonia oceanica is the nobel pen shell (Pinna nobilis), the biggest Mediterranean mollusc, which can grow to a meter and lives with part of the body buried in sand.

Among the echinoderms, it is considered that the starfish Asterina pancerii is the only strictly linked to the meadow, although sea urchins such as Paracentrotus lividus can become very abundant.

Other animals that roam freely in the meadow are fishes. The painted comber (Serranus scriba) is the most common; but the most unique is Opeatogenys gracilis, green in order to camouflage itself in the leaves. Other that camouflage really good are the fishes from the genus Syngnathus, such as S. typhle and S. acus.

POSIDONIA HAS A HIGH ECOLOGICAL IMPORTANCE

As we have seen, Posidonia meadows are areas with high biodiversity of animal and plant species. So, it is home to many species at different stages of their life cycle.

But its importance goes further. Due to its growth through underground rhizomes, Posidonia retains the sand and, century after century, forms a natural barrier that provides protection for the coast, allowing the formation and gives stability to beaches, dunes and coastal forests.

Finally, a lot of organic matter is dispersed by currents and waves to other ecosystems. 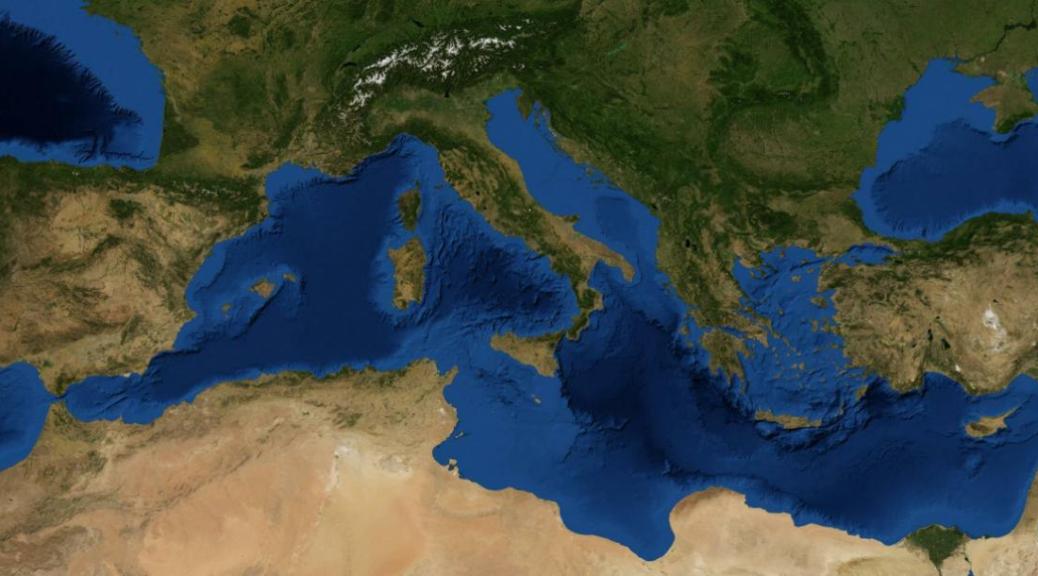 The Mediterranean Sea is a “sea in the middle of the land” (Mare medi terraneum, in Latin). Do you know how many species live in this small sea? Do you know which is the average and maximum depth? These and more questions are answered in this post and are going to show you the magnificence of this sea.

HOW MANY SPECIES LIVE IN THE MEDITERRANEAN SEA?

Approximately 17,000 species have been reported to occur in the Mediterranean Sea. Did you think that they were more or less than 17,000? Of these, 26% are marine microbes (microorganisms), but it might be higher if we consider the very limited data available. If we just consider the animals, most of them are crustaceans (13.2%) and molluscs (12.4%), while vertebrates represent a small part (4.1%). Plants represent only a 5% of the amount of species. It’s important to highlight the presence of about 1,200 algae species, but authors have included them in the microbes and plants, despite they are not true plants.

These 17,000 species represent a 6.4% of the global species. Is this a lot or a little? If one considers that the Mediterranean Sea is only a 0.82% in surface area and 0.32% in volume as compared to the world oceans, draw conclusions yourself. It means that less than a 1% of the surface area of ocean have more than a 6% of the marine species!

For all these reasons, the Mediterranean Sea is considered a hot spot of biodiversity, explained by paleogeographic and ecological reasons. From a paleogeographic point of view, its high species richness is due to both its long evolutionary history and the diversity pump from the Atlantic Ocean. In addition, from an ecological view, its species richness is due to the present-day variety of climatic and hydrologic situations, leading to the occurrence of temperate and subtropical species.

In this numbers, we have to add an additional 600 metazoan species. Who are they? The Mediterranean biodiversity is influenced by the introduction of 600 new species, which represent a 3.3% of the total estimates. In fact, this number is continuously increasing. Molluscs (33%), arthropods (18%) and chordates (17%) are the groups with more alien species. A well-known and toxic example is the blowfish.

IS THE MEDITERRANEAN SEA A DEEP SEA?

DID YOU KNOW THAT THE MEDITERRANEAN SEA BECAME NEARLY DESICCATED?

About 6 million years ago, towards the end of the Miocene, the Mediterranean Sea was isolated from the rest of the world ocean. Because of the Mediterranean sea has a negative water balance, it is that evaporation is higher than the entrance of water, it become almost desiccated and, probably, was transformed into a series of large evaporitic lakes during the salinity crisis at the Messinian Stage.

The continental shelves of the Mediterranean are narrow and crossed by submarine canyons, so open sea represents a large area. In fact, 80% of the total Mediterranean waters are open ocean and can be classified as deep sea. An unusual characteristic is the high homothermy from 300-500 m to the seafloor (there is an homogeneous temperature of 12.8 – 13.5ºC in the western Mediterranean and 13.5 – 15.5ºC in the eastern Mediterranean).