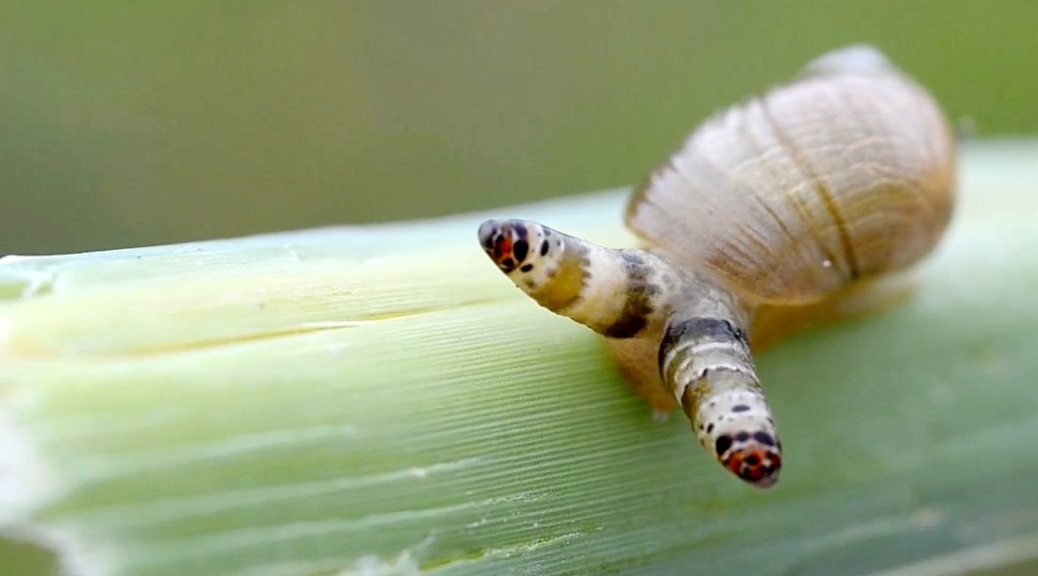 Many horror films are based on organisms that have the ability to control the victim’s mind. In fact, there is some kind of real parasites and parasitoids which can control its host’s behaviour to guarantee its breeding. In this post, we will discuss some examples of those interesting parasites.

Parasitism is a type of predation where an organism (parasite) extracts a benefit at the expenses of another one (host). The parasites have lost the ability to synthesize some essential molecules that get through hosts, as well as parasitism is a mandatory relationship. There are many types of parasites, but the most interesting examples are zombies parasites.

The parasitic zombies have in common the ability to control and modify the behavior and physiology of the host to guarantee its breeding. Can you find them in different taxonomic groups (fungi, protozoa, nematodes, arthropods…). There are differents mechanisms to fulfill its objective, but the most important are: control the behavior of the host or induce him to suicide.

Glyptapanteles is a genus of parasitoid wasp that infects species of Lepidoptera Thyrinteina leucocerae in its larval phase. The larvae become caterpillars which grow and feed normally. In the final stages of development of the caterpillar,  the pupae of parasitoid wasp (the metamorphosis between larvae and the adult stage) are released and settled next to the caterpillar. Before his release, the pupae excrete an endocrine substance that modifies the behavior of the caterpillar forcing him to protect the small pupae. caterpillar stops feeding and move until the adult wasp emerges. At that time, the Caterpillar dies from starvation and exhaustion.

Another example of  interesting parasitoid wasp, is the species Hymenoepimecis argyraphaga infecting Plesiometa argyra (a species of tropical spider). In this case, the female sticks to the abdomen of the spider its egg. When the hematophagous (which feed on blood) larvae hatches, injected a chemical substance that causes the host to create a cobweb that is capable of supporting the weight of the cocoon, rather than a cobweb to catch insects. The larvae then feeds the host until it dies and then create its cocoon in the cobweb. Then, it will transform into pupae and eventually will emerge as an adult.

The above examples are parasitoids that they finally finished with the life of its host, but there are cases where once the parasitoid releases from the victim’s body, the host can continue to live. This is the case of the infection of the Ladybird Coccinella septempunctata by wasp species Dinocampus coccinellae. The  female wasp injects the eggs in the abdomen of the Ladybird that incubates them inside. When the larvae have been developed (without touching any host’s vital organ), are released and form a cocoon that will protect the Ladybird.  If the host gets to survive for seven days, when the larvae become adult Ladybug will recover and can continue with normal life cycle.

Myrmeconema neotropicum is a nematode that infects tropical ants of the species Cephalotes atratus. These ants are completely black, but when they are infected with the parasite, their abdomen becomes reddish. This change allows the host camouflaged with certain berries and confuse frugivorous birds. In addition, this parasite is being able to change the behavior of ant and force her to rise to clear and unprotected areas to be located by the predators. The birds are hosts intermediaries, since thanks to their excrement, they get a greater dispersion of the eggs of parasites.

Another species of nematode, namely Spinochordodes tellinii, infects to crickets Meconema Thalassinum (Orthoptera) species. The larvae of the parasite are in the water and are ingested by mosquitoes (intermediate host). Mosquitoes are swallowed up by Crickets and once in the intestine, the nematode grows up to triple the size of the insect. When the parasite is adult, modifies the behavior of the host causing and induces him to commit suicide in the water. Thus, the parasite is free in its middle order to breed.

The flatworm or platyhelminth Leucochloridium paradoxum infects snails of the species Succinea putris. The host eats the larvae of the parasite that develops into the digestive tract of the host to give rise to the sporocysts (a kind of sacks that contain thousands of larvae, known as cercarias). The sporocysts are directed towards the tentacles of the snail’s eyes and causes a very exaggerated inflammation that resembles a caterpillar. They also induce a change in the behavior of the snail, leading him away from protected areas and forcing them to expose in places where it can be seen by the birds. The movement of the tentacles draws the attention of the birds that eat the snail and spread through their feces the cercaria (next state of maturation of the parasite).

Finally, but no less important, highlights the parasitic fungus Ophiocordyceps unilateralis infecting species tropical ants (Camponotus leonardi). The host ingests the spores of the fungus. Once in the digestive system, it induces a change in the behaviour of the Ant, forcing her to climb to high places where anchor with jaws. Once there, the spores germinate through the host’s exoskeleton to release their reproductive structures.

Today, however, the mechanisms used by these parasites zombies information continue to be investigated. Do you think that they seem to beings from a horror film? No,  it is not science fiction. It’s our surprising nature.