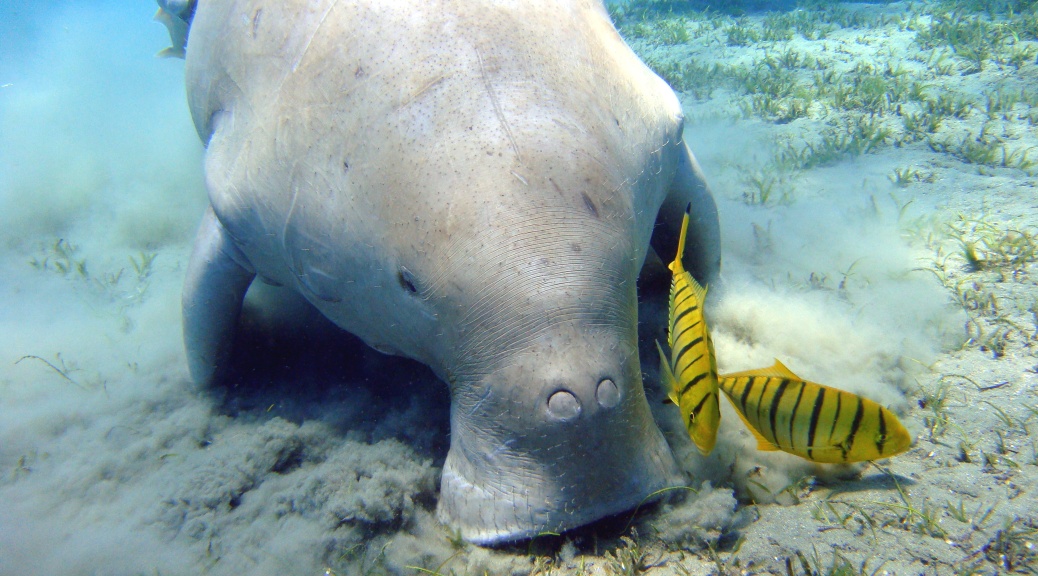 Maybe, cetaceans (dolphins, whales and other species) are among the most well-known marine mammals, but other groups are also included: the polar bear, the pinnipeds (which contain walrus and seals), sea otters and sirenians (with manatees and the dugong). In this post, we are talking about the dugong, one of the four living sirenian species.

Sirenians, also known as sea cows, are an order of four living species, which contain 3 species of manatees (Trichechus) and the dugong (Dugong). The order originated 50-55 million years ago in the African or European region, depending on the sources. All their activities, also the fact of giving birth, take place in the water, so they are totally aquatic mammals. The four species live in warm waters with abundant seagrass and vegetation, since they are herbivorous. Until 18th century, a fifth species existed: the Steller’s sea cow (Hydrodamalis gigas), that was 9 metres long and was hunted to extinction.

THE DUGONG: DESCRIPTION AND BIOLOGY

Despite nowadays there is a single extant species of dugong, 19 extinct genera have been described by scientists.

Dugongs (Dugong dugon) are sirenians with a gray and smooth skin, the mouth opens ventrally beneath a muzzle and present a dolphin-like tail, which is different from manatees and allows its identification. Due to its strongly downturned snout, dugongs are obligate bottom feeders. Males have tusks, but not females. The flippers are short and lack nails. They may weigh 400 kg and measure up to 3.5 m in length.

Dugongs inhabit in the tropical and subtropical region of the Indo-Pacific, including Red Sea; in shallow water less than 10 m deep. This represents a potential area of occupancy of more than 125,000 square km. They feed on seagrass rhizomes (more than on leaves) and other plants, which are rich in available nutrients (such as nitrogen) and starch, are easily masticated and poor in fiber. In some cases, they eat invertebrates mainly during the winter at the higher latitudes of their range.

They are quite difficult to observe because they surface very discreetly, with only their nostrils out of the water. Different from manatees, dugong spends all its life in the sea.

Dugongs are generally solitaries, since the only long-lasting social unit is between the mother and her calf. Females usually have their first calf when they are 6 to 17 years old and the time between births ranges from 3 to 7 years. The usual litter size is one and the gestation period lasts for 13 months. The oldest dugong found in a research was estimated to be 73 years old.

According to the IUCN Red List, dugongs are classified as a vulnerable species. Moreover, the total population size is unknown. Dugongs are vulnerable to several anthropogenic influences: