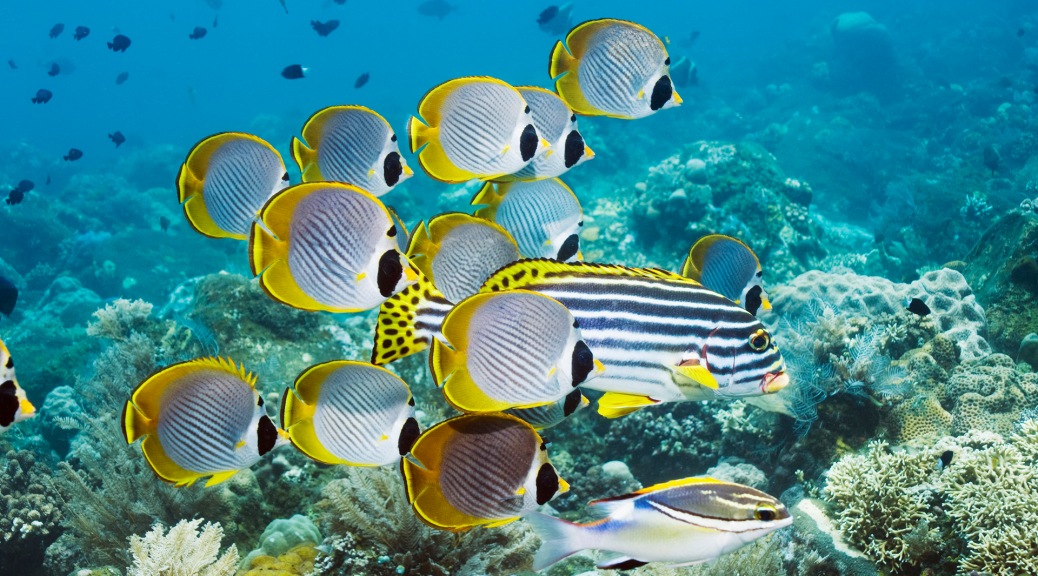 I have decided to talk about the methods that fishes use to regulate body temperature. So, this week I will focus on cold-blooded fishes (ectotherms or poikilotherms) and the next one, on the totally or partially warm-blooded (endotherms).

According to physiologist, thermal relationships between animals and their environment might be of different types:

Cold-blooded animals, like most of the fishes, have to have the ability to tolerate a wide range of temperatures (eurithermal organisms). The reason is that they have to function in several body temperatures in order to survive environmental temperature changes.

Another concept is termoregulation, that consists on the maintenance of body temperature relatively constant. So, independently of their endotherm or ectotherm condition, at the same time, animals can be thermoregulator or not. This thermoregulation can be explained by its behaviour (for example, avoiding specific temperatures) or by physiologic methods (in this case, they are called homeotherms).

At sea, water masses present different temperatures: the shallower waters has higher temperatures than the deeper. Fishes can choose to stay in a specific water mass or another and they maintain the same temperature. This is a single example of behavioural thermoregulation.

HOW DO FISHES PREVENT TO DIE TO A EXCESS OF HEAT?

When a poikilotherm organism is under high temperatures (but not lethal) produce Heat Shock Proteins. This strategy is not exclusive of fishes. In fact, this response is produced by all the animals. Most of these proteins are synthesised just when a body temperature increase happens or by other factors. The increase of the body temperature is a risk of death because proteins get denatured and they lose their function.

So Heat Shock Protein are responsible of compensate denaturation of proteins helping them to fold again. This process spends so many energy.

WHY DO FISHES NOT FREEZE IN COLD WATERS?

If fishes didn’t have mechanisms to avoid freezing, their body fluids would freeze from -0.1 to -1.9ºC. We have to keep in mind that internal freezing of cells produce their death, what can produce the death of the animal. In any case, in a freezing process, the first that freezes are body fluids outside the cells, what suppose a less risk.

In general, organisms that under the risk of freezing have several methods to face this situation, like the production of antifreeze or supercooling.

Antifreeze are dissolved substances present in body liquids to decrease the freezing point (temperature from which a liquid freeze).

This substances can work in two ways. On the one hand, their presence in a liquid increases the concentration of substances and this produce a decrease of freezing point, but it is not for their chemical properties.

On the other hand, these substance can present chemical attributes that produce a reduction of the freezing point. In specific, they join to ice crystals and avoid their growing. This is the case of most of Teleostei fishes.

In the case of polar fishes, despite some species maintain antifreeze during all the year, most of them produce this substances only in winter.

To give an example, winter flounder (Pleuronectes americanus) is one of the most known species that produce antifreeze. This animal has so many copies of the gene that encode the synthesis of the antifreeze protein and these are synthesised before the winter thanks to the induction by the reduction of sun light.

Despite animals can voluntarily produce their supercooling, they can modify the probability of freeze spontaneously. To do it, they eliminate the nucleating agents of ice, substances that are the focus of the development of freezing.

Some deep fishes can swim, although the freezing point is at -1ºC, in waters of -1.9ºC.

In the previous post we discovered the anatomical changes associated with bipedalism in early hominids and the relationship of the selection of this feature with climate change. Is bipedalism a trait that makes us human? What are the advantages over other quadruped animals?

WHAT IS THE PLIOCENE?

Since the origin of our planet, geologists have divided time into different divisions of millions of years: the eons (Archean, Proterozoic and Phanerozoic), which in turn are divided into different eras. The Phanerozoic (from 542 Ma to present) is divided into three eras, from oldest to newest: Paleozoic, Mesozoic and Cenozoic. In this link you can see  the major biological milestones for each epoch.

The Miocene is the time when the hominoids appear, (Proconsul is the most famous genus) and in the Pliocene appears, among others, Australopithecus. Homo sapiens do not appear until the Holocene, a blink in the planet’s history, as they say.

Usually the climate changes that have been happening throughout the history of Earth, represent extinction, diversification and new species, and so does our evolutionary branch: many authors relate climatic fluctuations with milestones of hominins. If you are interested in this interactive you can investigate this issue.

One of these climatic changes (caused by the collision of the Eurasian and Indica tectonic plates,  giving rise to the Himalayas and changing wind currents) was responsible for the disappearance of large tracts of rainforest, giving way to a landscape shrub or savanna. Hominoids who stayed in the forest, led to the current nonhuman apes, while those who occupied the savanna–trees mosaic led to hominins, our lineage. What are the advantatges of bipedalism in that landscape?

Thus, despite the disadvantages, in a warm environment, rather arid and with few trees for shelter from predators, who survived were bipedal hominoids. We consider our bipedalism as a trait that makes us human, as it is unique among animals: only birds are fully bipedal -like some extinguished dinosaurs–, and except the penguin -with clumsy gait–, their spine is not perpendicular to the ground, like ours.

If you enjoyed this article, please share it on social networks to spread it. The aim of the blog, after all, is to spread science and reach as many people as possible.