In the same way that grasshoppers are jumping and moving through the field, there is a type of genes that jump through our genome and change its position. Our genome is not static, so read on to know everything about these kinds of genes.

THE DISCOVERY OF TRANSPONABLE ELEMENTS

Barbara McClintock discovered transposable elements, or also called mobile genetic elements because of their ability to move around the genome. The “jumping genes,” as this American geneticist christened them, changed the knowledge about genetics so far, since at first the scientific community did not believe in the idea that a DNA sequence could move on its own.

She had a special relationship with corn, a plant domesticated by man for 10,000 years and has become one of the three most cultivated cereals in the world. In addition, it is one of the most important staple foods since from it many derived products are made, such as flours and oils. Its great industrial value has made it have been studied in depth and its genome has been sequenced.

McClintock began studying the DNA of corn and observed that there were a number of genetic sequences that, without knowing how, changed position within the genome. Somehow, these sequences turned on or off the expression of other corn genes and this was observed with the naked eye; the grains of a corn cob could be of different colours (Figure 1), even within the same grain there were areas of various colours. Then McClintock sought the answer of how this was possible if the genes responsible for colour were inherited from the parents. The result was the discovery of the transposable elements, which led her to win the Nobel Prize in Medicine in 1983.

EFFECTS OF THE CHANGE OF POSITION

When the transposable elements jump and change position they produce a loss of bases when leaving the place where they rested. This loss of some bases does not have “much” importance. But if the transposable element is inserted into a gene, there is an addition of a large number of bases that will cause the loose of gene’s function. For this reason, mobile genetic elements produce mutations because by jumping and changing their location, they alter the DNA sequence and prevent genes from encoding proteins through the genetic code. However, when they jump again, the gene regains its functionality and expresses itself as if nothing had happened.

Often, these jumping genes are considered parasites, because the cell cannot get rid of them. Although they can also bring benefits to the cell, such as transporting advantageous genes. The best known example is not found in humans, but in bacteria and their resistance to antibiotics such as penicillin, discovered by Alexander Fleming. The spread of antibiotic resistance is due to genes that encode enzymes that inactivate them, and that are located in mobile genetic elements. It is usually related to the horizontal transfer of genes, in which they can move from one cell to another as if they were bees that go from flower to flower. When this happens, the transposable element is introduced into a new cell and inserted into the genome of this new cell. That is when it will be faithfully transmitted to its progeny through the normal process of DNA replication and cell division.

Instead, the others are class II transposable elements or DNA transposons. These are the elements that McClintock discovered in corn, with a 10% representation in our genome and responsible for the spread of antibiotic resistance in bacterial strains.

It should be noted that DNA transposons never use intermediaries, but are autonomous. They jump from one place of the genome to another by themselves, without any help. The mechanism they use is called “cut and paste” and is similar to the cut and paste we use on the computer. The DNA transposon cuts the DNA sequence that has end and look for another place to settle. Then there it also cuts the DNA sequence and is “hooked” (Figure 2).

It is currently known that the activity of transposable elements is a source of evolutionary innovation due to the generation of mutations, which could have been key both in the development of organisms and in different evolutionary phenomena such as speciation; the process by which a population of a given species gives rise to another or other species.

The vast majority of these mutations are deleterious to organisms, but some of them will lead to adaptive improvement and tend to spread throughout the population. We could put our hand in the fire and we probably wouldn’t burn to ensure that much of the variability that life shows around us originally comes from the displacement of mobile genetic elements or transposable elements.

In the same way that Alan Turing decoded Enigma, the encryption machine used by the German army in World War II, several scientists managed to decipher the genetic code. The solution to this framework has allowed us to understand how cells work and make genetic manipulation possible.

A code is a system of replacing the words in a message with other words or symbols, so that nobody can understand it unless they know the system. For example the genetic code.

Although it seems to be a lie, all living beings (except for some bacteria) biologically work in the same way. And it is that Jacques Monod already said, everything that is verified as true for E. coli must also be true for elephants.

From the cells of the blue whale, the largest animal on the planet, to the cells of a hummingbird, passing through humans, are the same. This is thanks to the genetic code, which allows the information of each gene to be transmitted to the proteins, the executors of this information.

This flow of information was named by Francis Crick, in 1958, as the central dogma of molecular biology (Figure 1). In it he claimed that information flows from DNA to RNA, and then from RNA to proteins. This is how genetic information is transmitted and expressed unidirectionally. However, later modifications were added. Crick claimed that only DNA can be duplicated and transcribed to RNA. However, it has been seen that the replication of its RNA also occurs in viruses and that it can perform a reverse transcription to generate DNA again.

Inside the cells three different languages ​​are spoken, but they can be related through the genetic code.

The one we already know is the language of deoxyribonucleic acid (DNA), wound in a double chain and composed of 4 letters that correspond to the nitrogenous bases: adenine (A), thymine (T), cytosine (C) and guanine (G).

Another language very similar to the latter is that of RNA. It differs from DNA mainly in three aspects: (i) it is composed of a single chain instead of being double-stranded, (ii) its sugars are ribose instead of deoxyribose (hence the name of ribonucleic acid) and (iii) it contains the base uracil (U) instead of T. Neither the change of sugar nor the substitution of U by T alters the pairing with base A, so that RNA synthesis can be performed directly on a DNA template.

As we have been saying, the genetic code is the rules that follow the nucleotide sequence of a gene, through the RNA intermediary, to be translated into an amino acid sequence of a protein. There are several types of RNA, but the one that interests us is the messenger RNA (mRNA), essential in the transcription process.
The cells decode the RNA by reading its nucleotides in groups of three (Figure 3). Since mRNA is a polymer of four different nucleotides, there are 64 possible combinations of three nucleotides (43). This brings us to one of its characteristics: it is degenerate. This means that there are several triplets for the same amino acid (synonymous codons). For example, proline is coded by the triplets CCU, CCC, CCA and CCG.

The genetic code is not ambiguous since each triplet has its own meaning. All triplets make sense, either encode a particular amino acid or indicate read completion. Most amino acids are encoded by at least two codons. Methionine and tryptophan are the only amino acids that are codified only by a codon. But each codon codes only for an amino acid or stop sign. In addition, it is unidirectional, all triplets are read in the 5′-3′ direction.
The AUG codon serves as the start codon at which translation begins. There is only one start codon that codes for the amino acid methionine, while there are three stop codons (UAA, UAG and UGA). These codons cause the polypeptide to be released from the ribosome, where the translation occurs.
The position of the start codon determines the point where translation of the mRNA and its reading frame will begin. This last point is important because the same nucleotide sequence can encode completely different polypeptides depending on the frame in which it is read (Figure 4). However, only one of the three reading patterns of a mRNA encodes the correct protein. The displacement in the reading frame causes the message no longer to make sense. 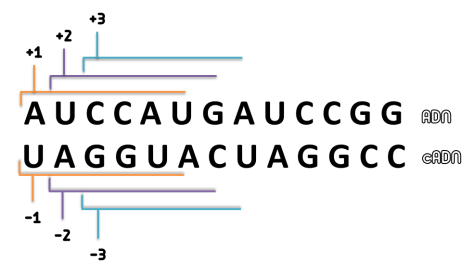 As we said at the beginning, one of the main characteristics of the genetic code is that it is universal, since almost all living beings use it (with the exception of some bacteria). This is important because a genetic code shared by such diverse organisms provides important evidence of a common origin of life on Earth. The species of the Earth of today probably evolved from an ancestral organism in which the genetic code was already present. Because it is essential for cellular function, it should tend to remain unchanged in the species through the generations. This type of evolutionary process can explain the remarkable similarity of the genetic code in present organisms.

Although the human being itself continues to be an enigma for science, the revolution of the deciphering of the genetic code has allowed us to delve into the functioning of our body, specifically that of our cells, and cross borders to genetic manipulation.