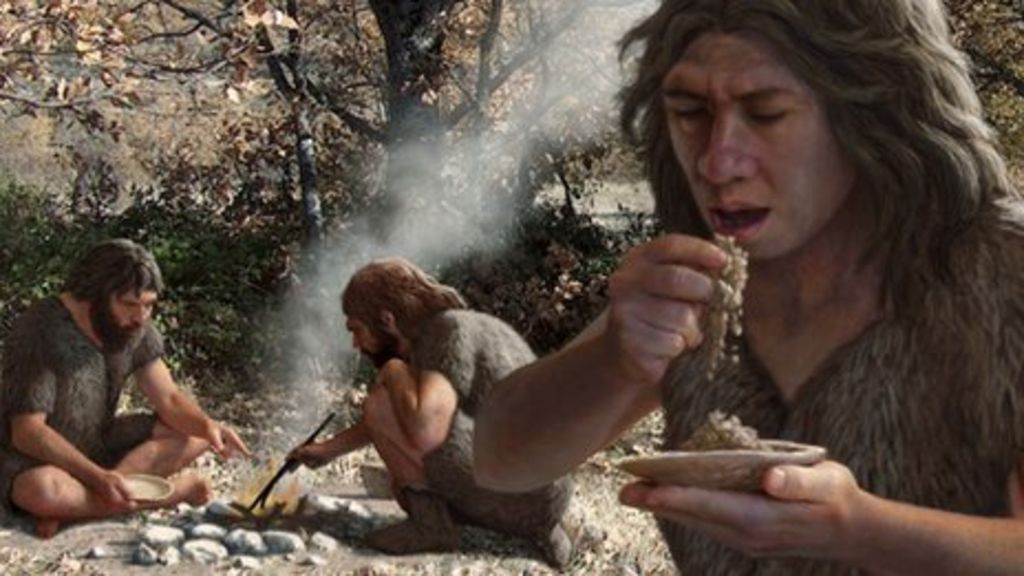 Cooking is a distinctive and unique feature of our species. After the success of Eating meat made us human, we continue delving into the nutrition of our ancestors as one of many factors that led us to Homo sapiens. We will analyze the contributions of our readers in the previous post on the importance of carbohydrates and the use of fire.

In the previous post we learned that one factor that contributed to the fast growth of the brain was the increased intake of meat by H. habilis, that allowed them to save energy in digestion (Aiello, L. Wheeler, P, 1995). Another factor that allowed saving energy to dedicate to brain growth, since Lucy, was bipedalism (Adrienne L. Zihlman and Debra R. Bolter, 2015).

One of the things that gave us evolutionary success is our ability to take advantage of almost any food, allowing our expansion around the globe. Current diets are varied and traditionally linked to the availability of the geographical area or time of year, which changed with the development of agriculture and livestock. Human groups studied in historical period without agriculture or livestock, hunt, fish and gather very different foods, but no groups exclusively carnivorous or exclusively vegetarian have been found (except Eskimos, who have traditionally fed on hunting and fishing because of the characteristics of their environment, frozen during almost all the year).

The first tools, possibly used by Australopithecus but obvious since H. habilis, allowed our ancestors to get food that otherwise would have been impossible to get: drilling and tearing flesh, breaking the hard shells of nuts, and later crushing and grinding grain. Thus, the basis of our current supplies are hard cereal grains (e.g. rice, wheat) and the dried seeds of legumes (e.g. lentils), because our needing of protein intake is low, although meat is consumed in excess in the First World countries.

But before the advent of agriculture, our ancestors ate what they found: Neanderthals in hostile areas had to base the diet with meat and supplement it with vegetables when they were available, while in milder climate zones, like the Mediterranean , make use of aquatic resources as molluscs, turtles and fish. Furthermore, by its robust body and increased muscle they needed more protein intake.

THE ORIGINS OF THE CUISINE

As we have seen, seeds are very nutritious because they are rich in carbohydrates (especially starch), but low in protein; in addition, legumes must be cooked to be assimilated. No other animal, except us and our ancestors, prepare food or cooks. Cooking is an unique human trait which opened an infinite number of possibilities in our nutrition.

The first traces of use of fire date back 1.6 million years ago in Africa, although the first reliable evidence is a hearth 0.79 million years old. The responsible: Homo erectus, but those who used fire continuously, especially for cooking, were a later species: Neanderthals.

The advantages of controlling fire were numerous and very important, but in this post we will delve into the first one:

In short, cooking was another factor involved in the brain development and cognitive abilities of our ancestors, allowed energy savings to digest and chew food, decreased masticatory apparatus, allowed the young become earlier independent from their breast-feeding mothers (who could mate more often), improved immune system… Even improved social skills: left more free time so they could dedicate it to other tasks, such as cooperation to keep the fire, planning the collection or capture of food, distribution of food in the group acoording to range and health of individuals… intelligence enhanced cooking techniques, which in turn enhanced the intelligence, in an infinite wheel that still exists today.

Currently some of the world’s population can choose their diet: omnivorous, vegetarian, vegan, raw foodism, carnivorous, paleodiet… but what ate our ancestors?  Which diet is more suited to the one of our ancestors? Without going into polemics, we will discuss one of the crucial facts of the evolution from Australopitechus to Homo: the meat intake.

WHAT DID OUR RELATIVES EAT ?

One of the reasons given to follow a strict vegetarian or vegan diet is that as “we are apes”, they feed on fruits and plants, and moreover, a more “natural” diet  is achieved. Currently and traditionally the base of the world diet are the seeds of cereals (rice, wheat, corn, etc.) and legumes (beans, lentils…), which often require processing (flour, for example) and have nothing to do with their wild ancestors. Since agriculture and livestock was invented and we have selected the best varieties for human consumption, the label “natural” loses all meaning. Although transgenic food is now on everyone’s lips, we have been using the genetic modification for thousands of years.

That we are apes and the natural thing is to eat vegetables, is also not entirely true. As primates have evolved in trees, hominids have a strict diet or mainly folivorous -leaves- and frugivorous -fruit- (gorillas, orangutans), while gibbons also complete their diet with invertebrates. Our closest relatives however (bonobos, chimpanzees) are omnivorous as they eat vegetables, fruits, invertebrates and even small mammals and other primates (althought in less proportion than vegetables).

No wonder then that our direct distant ancestors as Australopithecus Lucy, ate leaves, fruits, roots and tubers as the basis of their diet. Some species, in addition to vegetables, also fed on invertebrates and small vertebrates, similar to modern chimpanzees.

Fruits have more sugars, although they are not very abundant in comparison with leaves and stems. But leaves have less nutritional value because they contain many fibers we can not absorb, such as cellulose. Legumes contain more protein than grains, but some essential amino acids and vitamins (such as B12) are absent or in a few proportion in vegetables and easily assimilable iron (hemo iron) is found only in food with animal origin.

In short, vegetables are harder to digest compared to animals, so mammalian herbivores have longer digestive systems, or compartmented stomachs, chew over long periods of time and some are ruminants, while carnivores have digestive systems with lower absorption surface and require little chewing of food.

2.6 million years ago, climate change made our planet cooler and drier. In Africa the savanna dominated much of the territory, so hominids had to deal with hard leaves, leaves covered with wax, hard or thorny stems, roots… these difficult to digest resources were utilised by Paranthropus, with large teeth and powerful musculature in the jaw to crush, although they had a similar brain to Australopithecus. They became extinct a million years ago.

But another group of hominins found a kind of resources that offered them more energy in smaller quantities, and were easier to chew: meat. Homo habilis was the first to eat meat at higher rates than the rest of relatives and also meats with more fat. It was an opportunist: they ate almost anything edible, instead, Paranthropus were specialists, so if their food was scarce, they had more possibilities to die.

While Australopithecus and Paranthropus had a cranial capacity of 400-500 cm 3, Homo habilis had up to 700 cm 3. This increased brain size allowed them greater versatility and ability to improvise to find food.

One thing that clearly differentiates us from other primates and animals is the large size of our brain. As you have noticed, H. habilis and is classified within our genus,  Homo, due to that great leap of brain size, among other things.

But a large brain also has drawbacks: 25% of our body’s energy is consumed by the brain at rest, H. habilis brain consumed 15% and Australopithecus only 10%. In addition to quantity, this energy also has to have quality: some fatty acids for proper brain function only are found in some nuts, but especially in animal fat, easier to achieve if vegetables were scarce.

The only way to dedicate more energy to brain function is to reduce the size of other high energy consumer organs (Aiello, L. Wheeler, P, 1995). Heart, kidney, liver, they are major consumers of energy, but vital, so the solution is to reduce the gut and that’s only possible with the change of an almost exclusively vegetarian diet (Australopithecus) to another of easier assimilation with more protein and animal fat (H. habilis).

A large brain also gave another advantage to H. habilis. Despite his appereance (small, no large fangs or claws) they could make use of a great variety of meat (first as scavengers and later as hunters) due to the use of tools. Australopithecus probably used some sort of simple tools, mostly wooden made, but we know for sure that early manufacture of stone tools (archaeological industry) belong to H. habilis. This allowed them to take advantage of the inside of the bone marrow of large prey killed by carnivores when all the flesh had been eaten by other animals. Currently only hyenas and bearded vultures can access this resource without tools. Besides, by not requiring such large teeth and jaws, the skull can accommodate a larger brain.

In short, the increase of the brain of Homo was possible by changing diet, which allowed a shorter digestive tract and smaller masticatory apparatus. In turn, to achieve these more energy foods more intelligence is required, resulting in more complex behaviors such as the use of manufactured tools (Oldowan lithic technology, Mode 1).

Our digestive system is the result of millions of years of evolution as opportunistic omnivores. Some current strict diets (vegetarian or almost carnivorous) are in contradiction with this biological heritage and the abuse and access to all kinds of food carry us all kinds of allergies and food problems. The secret remains following a balanced and varied diet.