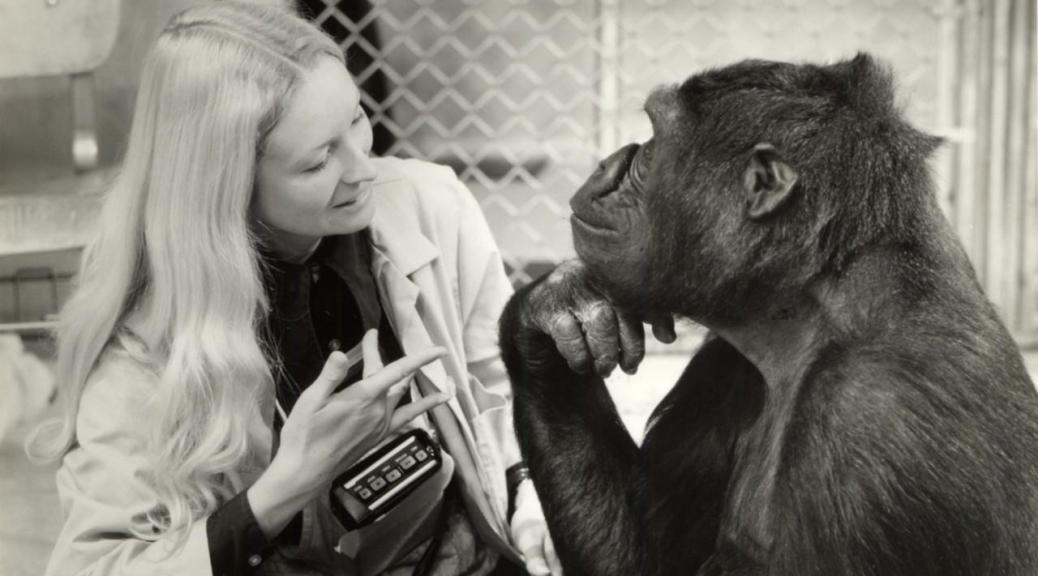 The origin of language is one of the unknowns that creates more discussion among anthropologists. Are we the only animals with a language with grammar? Did our ancestors speak? Do animals communicate only by imitating simple sounds? This article will attempt to address these issues and introduce Koko, the gorilla who learned sign language.

Clearly most living beings communicate in some way, either through visual, olfactory or chemical, acoustic signals… The clearest case we have close is barking, meowing… but also plants can communicate.

You have probably ever heard a parrot or parakeet say words, even the crows are great imitators. But it is just that, an imitation of few words. They are unable to make sentences or use the words they know to express new concepts. Or have a conversation. Sometimes scientists have educated baby apes as humans, in an attempt to teach them to speak. They never made it.

WHAT IS NECESSARY TO SPEAK ?

Given the depth of the subject, we can summarize that to talk is essential to have the necessary cognitive capabilities and a physical vocal apparatus that enables control of entry and exit of air in a certain way . Since some animals like whales, birds or apes have high cognitive abilities, why they do not start talking the same way as us? We begin to understand their way of communicating, so it is possible that some possess some sort of grammar, or a language such as dolphins or some birds. Or maybe we should clarify what is language. In this post we will focus on the case of primates, especially gorillas and chimpanzees.

The larynx contains the vocal cords. Notice the difference between a human and a chimpanzee:

Humans have the vocal cords in a lower postion, and we have a shortest oral and nasal cavity. To produce vocals clearly, the oral communication core, the larynx must be in a low position. That is why chimpanzees, cannot talk due to their physical limitations.

To investigate whether our ancestors could talk, studies focus mainly on the morphology of the hyoid bone, the position of the pharynx, the base of the skull and the brain impressions inside the skull. Recent research with Skull 5 of the Sima de los Huesos belonging to a Neanderthal, along with other studies of other fossils, suggests that 500,000 years ago they had a vocal apparatus like ours. If Neanderthals had the physical conditions did they speak?

Humans are the mammals with the largest brains relative to our bodies. The intelligence of a chimpanzee is compared to 4 years old child. If they can not speak for physical limitations, could they do it otherwise?

According to a study published in Nature , the FOXP2 gene appears to be responsible for our ability to control of precises movement that allows speech. People with inactive copies of this gene, have severe speech and language problems. The FOXP2 gene is different in only two amino acids between chimps and humans, and apparently is responsible that neither they nor the rest of vertebrates can talk. This difference, this mutation is believed to have appeared 500,000 years ago. Svante Pääbo and his team discovered that this gene was already like ours in Neanderthals. If this is true, added to what we have seen in the previous section, we can almost ensure that Neanderthals could speak.

TEACHING TO TALK TO OTHER APES

Since they can not talk, scientists have taught apes to communicate with humans by lexigrams (drawings respresentan words) and sign language. Washoe was the first non-human ape to learn the American Sign Language (ASL). It was a chimpanzee, learned about 350 words and taught his son some Loulis. Other chimpanzees were capable of it, but the most fascinating is the discovery of this communication behavior of wild chimpanzees signs (obviously, chimpanzees own signs, not the ASL). The bonobo Kanzhi communicated with lexigrams, and Koko has become a famous gorilla thanks to her mastery of ASL.

Koko (short for Hanabiko,  in Japanese, “Fireworks”) is a western lowland gorilla. Gorillas are the largest apes and hominids nowadays, with up to 180 Kg weight in males.

After chimpanzees and bonobos, gorillas are the most genetically similar to humans (we share more than 98% DNA). There are two species of gorillas:

Koko was born in 1971 in the San Francisco Zoo, and currently lives in the Gorilla Foundation in Redwood City, California. Since she was 6 months old Dr. Francine (Penny) Patterson (then PhD student) and Dr. Ron Cohn taught her American Sign Language (ASL). Other gorillas that were attached to the project were Michael (in 1976) and Ndume (1991).

Since then, Koko has learned up to 1000 ASL signs and understands approximately 2,000 words in English. It is even capable of combining different signs to explain concepts if seh don’t know the word. Michael and Ndume also managed to communicate through signs: Ndume learned some from Koko, which could prove Koko’s case is not unique but gestural communication is intrinsic in gorillas.

In this video Penny asks what Koko would like to do with their spare time. She answers that she would like to have a baby and thanks Penny when she tells her that they are trying:

OTHER SKILLS OF KOKO

Koko, living in a humanized environment, performs acts by imitation, according to researchers, she has not been forced to do so. She look at books, movies, makes paintings, looks her in the mirror, take care of pets… even plays the flute. This is especially important because it is capable of puckering in the proper position and control breathing. It can also simulate cough, which requires control over the larynx. Contrary to what was thought, control over the airways and therefore on future capabilities of our ancestors speaking, could have appeared millions sooner than previously thought.

Another subject worthy of study is the artistic ability of Koko and Michael. If other apes have created tools and language, it is art what separates us from them and our ancestors? Since Koko can communicate with a common language to us and puts names to her creations, is this some symbolic capacity? The line between apes and other H. sapiens, and therefore also between H. sapiens and other Homo, is getting thinner.

Finally, we leave you with the most important milestones after 40 years of study with Koko: