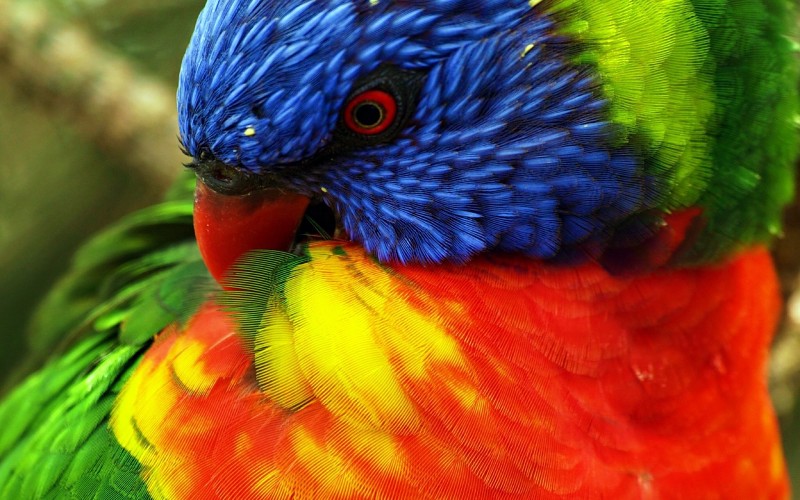 The most beautiful characteristic of birds is their different colour patterns between species, genders, ages, and even in individuals. In this post, we will discover some ecological and behavioural factors involved in the variability of colour in different individuals and how they are perceived by the bird eye.

Different colours of the bird plumage are determinated by the combination of the amount of pigments (melanin and carotene) in feathers, and the specific microestructure in some parts of the feather.

Some pigments, as melanin (eumelanin for black and grey, pheomelanin for brown and beige) are synthesized by birds. There are specific pigments of particular taxa, for example the pigment synthesized by the psittacidae family  (it includes macaws, parakeets and other from Africa and America).

Other substances, as carotenoids, are assimilated with food. For example, flamingos and roseate spoonbills find this pigments in small crustaceans that they eat. Thus, colours depend on habitat and season.

Also colours that depend on this pigments, birds have structural colours. On bird feathers can appear an effect, called “dissemination of Rayleigh“,  when rays of light hit the melanin microgranules that reflect short waves (blue) and transmit long waves.

In some birds, as balb ibis (Geronticus eremita), iridescense is showed under certain lighting conditions with purple and blue colours. This effect is the result of the light incidence in microleaf of the feathers: melanin absorbs light and determines the black colour, and the colours of rainbow are reflected by this microleafs, when microgranules could only reflect the blue colour.

3. HOW THIS VARIETY OF COLOURS IS PERCEIVED BY BIRDS?

In addition, birds have special oils on the surface of the cones that improve the colour vision enabling the perception of a colorful world.

Plumage colour helps to distinguish different species, between male and female in birds with sexually dimorphic, aged, and can be different between individuals of the same species. But also, in same species,  this variety is related with ecological and ethological factors.

Some studies point out colour is key indicator of birds’ health status and could be important in mate choise. In many species, females prefer to breed with brigher colour males. These preferences are due to brigher colour males show higher quality and a greater capacity to survive. The carotenoids that influence in plumage colour must be supplied by the diet, but also are involved in other vital processes such as inmune process, precursors of vitamins and control of oxidative stress. According this theory, colour is a good indicator of the state of bird health, because if an individual uses carotenoids in plumage colour other vital processes must be covered and this individual has a good health. In a research about mate choise in blue tit (Cyanistes caeruleus) was demonstrated that in brigher colour males the probability of selection is higher and their chicks grow best.

On other hand, there is some species with a cryptic plumage that makes observation hard. This kind of plumage is essential in species with high rate of predation because in this way the bird can mingle with the environment and the probability of predation decreases, specially during certain sensitive periods such us females hatching or chicks. An example of cryptic plumage is the nighthawk (Caprimulgus europaeus) that uses its plumage to dissaper in waffle when female is hatching to decrease the risk of predation.

Some individuals can have anomalies in their plumages due to influence of factors such us genetic variability, environmental pressures and diet. Some of the most common include:

Negative factors for quality of habitats have shown to have influence in colour birds. In this way, it is possible to study colour patterns in birds to relate them with the state of a population and to promote conservation measures. This methodology will be cheaper and gives us highly valuable information.

One thought on “Full colour: Birds and their plumage”