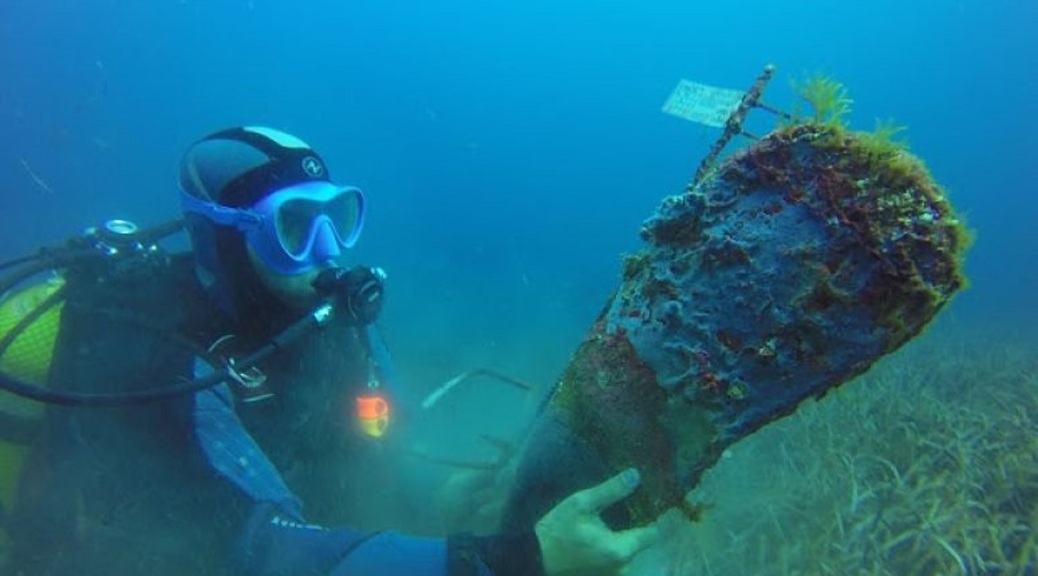 The nobel pen shells are the most emblematic molluscs of the Mediterranean since they only live in this sea. Its drastic reduction due to a parasite has led scientists to declare it as endangered. Do not miss this post to know more about the nobel pen shell and what is leading them to extinction, as well as what is being done and what you can do to save the species!

WHAT’S CAUSING THE MASSIVE DEATH OF THE NOBEL PEN SHELL?

THE NOBEL PEN SHELL, THE AFFECTED

The nobel pen shells (Pinna nobilis) are molluscs of the bivalve class. This means that they have a shell formed by two lateral shells, which are joined by a hinge.

The shell of the pen shells is shaped like an ear, hence its scientific name (Pinna), since it has a rounded upper part and the lower one ends in a tip. It is by the lower tip that they are buried in the substrate to hold onto the seabed. It can reach a meter long.

The nobel pen shells are the most characteristic mollusc of the Mediterranean, since it is in this sea the only place in the world where they live. It is, then, a species endemic to the Mediterranean. They are usually found associated with Posidonia meadows and their presence serves as an indicator of good water quality.

Among its threats are the capture by divers, pollution and anchoring of vessels in the Posidonia meadows. Now, anyway, we must add a new threat: a protozoan, which has led it to be in danger of extinction.

A PROTOZOAN, THE CULPRIT

A parasite that affects the digestive system of the pen shells is the culprit that they are in danger of extinction. Specifically, it is a protozoan of the genus Haplosporidium, which penetrates the digestive gland. How the pathogen has entered the mollusc is still a mystery.

In any case, it must be a very specific pathogen, since it has not affected its “sister” species, Pinna rudis, which lives in the same areas.

At the beginning of autumn 2016, a massive death of pen shells of the species Pinna nobilis was detected in several points of the Spanish Mediterranean coast.

A study carried out by the Balearic Oceanographic Center of the Spanish Institute of Oceanography has concluded that in most of the Spanish Mediterranean coast there are high mortality rates, up to 100% in some points, especially in the populations of Andalusia, Murcia, Valencia Community and Balearic Islands. In fact, this is the massive mortality event that has most affected the species to date.

In this video, you can see a massive death case in Tangó de Xàbia (Valencia Community):

Fortunately, the populations of the Catalan coast still persist, especially those located in Cap de Creus and in the Ebre Delta.

In addition, the high propagation rate of the protozoan could lead to an even worse situation. It is for this reason that it has been declared as a critically endangered species.

HOW ARE SCIENTISTS SAVING THE NOBEL PEN SHELL?

A project of the Ministry of Agriculture and Fisheries, Food and Environment of the Government of Spain, with a cost of 491,521 euros, aims to rescue 215 specimens of the species.

The project consists in its extraction, rescue and conservation in different centres, with the final goal of keeping the specimens healthy to avoid their infection, maintain the species, have a genetic reserve and, in the future, repopulate their habitats again and try reproduce the species in captivity.

WHAT CAN I DO?

According to a decalogue from the Spanish Malacology Society, this is what has to be done in case of finding a nobel pen shell.

In case the animal is alive:

In case the animal is death:

One thought on “What’s causing the massive death of the nobel pen shell?”